If Health Care Is So Important, Why Don’t We Care About Doctors?

If Health Care Is So Important, Why Don’t We Care About Doctors? 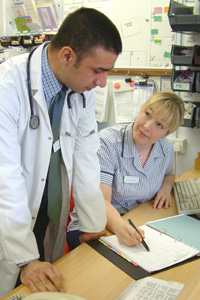 Whatever you might think about Obamacare, at best, it attempts to address the issue of paying for health care. Indeed, 99 percent of all the talk on “health care” revolves around matters of payment. Surely, this has to be dealt with, but what about quality? And, as I will discuss in this article, what about the doctors?

If you want to put some historical perspective on this, you can look back to 1965 and Medicare as the first big intrusion into the doctor/patient relationship. But, to some extent, the die was already cast when private insurance plans started proliferating after World War II.

However, it would be the late 1970s when the model began to seriously unravel. It was at this point that private insurance would become the dominant factor, essentially controlling how health care was to be practiced. True, those patients covered under PPO (Preferred Provider Organization) plans would have it better than their counterparts under HMO (Health Maintenance Organization) coverage, even if they had to pay more for the privilege.

In the initial stages of the insurance takeover of health care, doctors’ fees did not take such a beating (at least when compared to today), but things were to change. As it happened, the downward spiral required turncoat doctors to cooperate with the insurance companies. Thus, the greedy docs and local medical associations who thought that if they formed groups and played ball with big insurance may have seen their reward, but for every sellout, there are thousands of doctors who got screwed in the process.

Consider the plight of the new medical graduate today…

The newly minted doctor likely has well over $200,000 in student loan debt, which is going to be hard to pay off, given ludicrous resident salaries that are usually less than $50,000/year. And, for that, they get to put in 100 hours a week. Isn’t that what you want, a sleep-deprived doctor working on you? Besides, don’t you feel better knowing that the greedy docs aren’t making any money? Instead, it’s the greedy execs and administrators of the hospital corporations, not to mention the greedy insurance companies.

Please note that these residents are the heart of our hospital system; yet, they are fundamentally screwed by the system. Most nurses with several years in are doing a lot better than these doctors—in terms of outright salary, rational working conditions, and better lifestyle.

What about that resident after three years (or more), when his residency is completed? Well, then he gets to be the junior junior associate in a private practice, and will surely work hard for the money, which in most cases is not bad. But, he still has all that debt, and will be working only marginally fewer hours than he did as a resident.

If he moves up into the practice and becomes a partner, his earning potential increases of course, but given the vagaries of insurance reimbursements and malpractice premiums, for all his work and education, the financial rewards pale in comparison to any number of career tracks he could have pursued—based on his long-term proven commitment to academic excellence.

The upshot is that surprisingly few doctors enjoy their lives or their vocation, but have committed so much to get to that point that they must continue. Many opt out of traditional private practice altogether, contending that the business model does not work anymore, and even if it did, cannot stand the lifestyle.

Because of the threat of malpractice litigation (a problem that Obamacare did nothing to lessen), scores of otherwise unnecessary tests and procedures are ordered, driving up the price of care for no good reason.

Older doctors routinely complain about the lack of practical experience and knowledge shown by the up and comers, and this too comes back to the failed and broken system.

Let’s start with med school. Admission standards favoring state residents skew the relative quality of the students. And, of course, there is still the pervasive social engineering making it far too difficult for qualified Anglo students to gain admission, when compared to their minority brethren. For what it’s worth, being a white female currently affords no particular advantage.

While there is a fairly rigorous licensing process in place, it tends to select much more for those who are good at taking multiple choice tests, rather than those who also possess excellent clinical skills.

Recent medical graduates, as well as students doing clinical clerkships (rotations) routinely complain that much of what is taught in medical school—especially during the first two years—is overkill at best, and probably flat-out useless. Nearly all med students agree that the curriculum need not consume four years. Good luck trying to shorten that, given the big bucks collected in tuition.

Did you know that the so-called Match, which places med students in residencies, has total control of what position they will be offered, excepting the very unlikely case of a brilliant student somehow being able to arrange his own deal? Needless to say, many students will be disappointed with their “assignment.” Imagine that, after all those years in school, you are assigned your first job, and regardless of your wishes, your specialty is picked for you, as well.

The most desired specialties are those identified with the most normal hours, and highest incomes. Thus, few want to become pediatricians, and there is a big trend toward dermatology. One wonders how the residency rush would shake out if docs were just able to submit resumés to prospective hospitals?

So, how can this be changed, you might ask? Clearly, more docs and more patients have to speak out. Unfortunately, most doctors are hardly rebels. On the contrary, given all those years of being good students and playing the game so well, they are quite compliant individuals. Sadly, certain specialties will inexplicably undermine their own, or not try to stem the tide of para-professionals, clueless regulators, and feckless bureaucrats. Those few doctors who do speak out must confront an incredibly monopolistic and vindictive system.

If there is a silver lining in Obamacare, it will be when the average Joe speaks out on behalf of his “provider,” the doctor. This could occur much sooner than the politicians think.