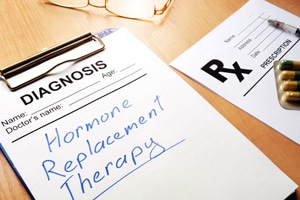 As a woman approaches menopause, ovarian production of the hormones estrogen and progesterone is reduced. Symptoms attributed to lowered or fluctuating estrogen levels include hot flashes, skin and vaginal dryness, as well as medical conditions such as osteoporosis. Hormone Replacement Therapy (HRT)—as applied to relieving menopausal symptoms—was available as early as the 1940s, but came into widespread use in the mid-1960s.

In the 1960s and 70s, “unopposed” estrogen only was given. Studies published at the time suggested that the estrogen-only regimen could reduce the risk of coronary heart disease by almost 50%. So-called “combined HRT” (or “combination HRT”) adds progestin (synthetic progesterone), and was introduced in the 1980s, following the rise in rates of endometrial carcinoma in the mid-1970s associated with unopposed regimens. Generally, combination therapy is indicated in women who have a uterus.

Further studies led to the prevailing view that HRT (opposed or unopposed as appropriate to the patient) was a low-risk intervention with immediate value for symptom relief in recently menopausal women, and that it probably conferred long-term protection against the major chronic diseases that affect women after menopause. Then came the Women’s Health Initiative (WHI). In essence, the WHI was designed to test whether the beneficial associations consistently seen in women starting HRT near menopause would be found in women well beyond menopause.

For reasons which are controversial to this day, the portion of the WHI dealing with conjugated equine estrogens and medroxyprogesterone acetate was terminated early, and results were published in 2002. Upon its release, the widelypublicized conclusion was that HRT is linked to breast cancer and heart attacks. As a result, HRT use dropped as much as 80%.

In a tragic, but classic case of “Now you tell me,” multiple reports have come out in the last few months noting—among other things—that the breast cancer and heart attack risks were not statistically significant. Besides, the study focused on women over 60, but somehow the results were generalized to younger women. In 2013, a study posited that avoiding HRT resulted in the premature deaths of 18,601 to 91,610 hysterectomized women.

According to Dr. JoAnn E. Manson, an endocrinologist and one of the principal investigators for the WHI, “The WHI findings have been seriously misunderstood and misinterpreted,” and millions of women for whom the benefits clearly outweigh the risks are needlessly being denied treatment. “The pendulum has swung too far,” she said.

“Highly unusual circumstances prevailed when the WHI CEE + MPA trial was stopped prematurely in July 2002. The investigators most capable of correcting the critical misinterpretations of the data were actively excluded from the writing and dissemination activities. [G]ood science became distorted and ultimately caused substantial and ongoing harm to women for whom appropriate and beneficial treatment was either stopped or never started.”

And now, 15 years after the over-hyped study that scared so many women off HRT, another one is hot off the presses. Bottom line conclusion: “Menopausal hormone therapy for five to seven years was not associated with risk of long-term all-cause mortality.”

In a recent interview with Dr. Langer, he revealed that:

“Most of the WHI principal investigators who stayed on (after Langer left) really believed that they were doing women a favor. They thought this stuff was poison; that it had been foisted on women by the evil pharmaceutical companies and the influence of Robert Wilson’s Feminine Forever; and they were doing women a favor by protecting them against breast cancer and heart attacks.  In reality, the results did not support that stance, especially for younger menopausal women.”

The fallout in North America and around the world has been “tragic,” says Dr. Robert Reid, author of the Society of Obstetricians and Gynaecologists of Canada hormone therapy guidelines. “Millions of women were denied treatment that is safe and effective, and they’ve suffered for years.”

More than that, well over a decade has been lost, in which HRT could have been dispensed to millions of women. We can only wait and watch for the inevitable consequences. Yet again, women become victims of the healthcare system.