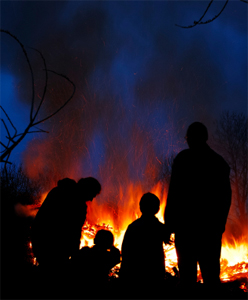 Strange, isn’t it? A day hardly goes by without a pressure group warning us how harmful infinitesimal amounts of some chemical might be to our health. Yet, as a society, we don’t seem to care very much about threats to our health—and our lives—that are orders of magnitude more likely, and are vastly more controllable.

It hurts even more when the dangers are relatively well-known, yet progress in controlling them is either painfully slow, or non-existent.

For example, this column has railed in the past about poor infection control in hospitals, that directly leads to thousands of deaths every year. Nutritionists lament the lack of public reaction to the devastating health effects of obesity. And, much to our collective shame, according to the Northeast States Emergency Consortium:

America’s fire death rate is one of the highest per capita in the industrialized world. Fire kills over 4,000 and injures more than 23,000 citizens each year. Firefighters pay a high price as well; approximately 100 firefighters die in the line of duty each year. Property losses due to fire exceed $8.5 billion a year.

The good news is that fire deaths keep decreasing. There are several reasons for this, as detailed in in an article appearing in Fire Protection Engineering in 2005, written by Elliot F. Eisenberg, Ph.D.

The large decline in fire death rates in the U.S. has been the result of several factors, including the adoption of increasingly stringent building codes across the country…along with better heating and electrical design, which have resulted in the use of fewer extension cords and space heaters. Also, improved fire ratings on upholstered furnishings, bedding and sleeping attire, and the increased use of childproof devices have all helped reduce U.S. fire deaths.

In addition, there has also been a strong push to reduce smoking since the first Surgeon General’s report linking smoking and lung cancer in 1964. Since smoking is the leading cause of residential fire deaths, any success in reducing it (along with drug and alcohol abuse) necessarily translates into fewer fire deaths.

Collectively, these interventions, public-awareness campaigns, and code improvements have cumulatively saved about 155,000 lives since 1960.

Eisenberg does note, however, that because these very solutions have been adopted, and have worked so well, the rate of decrease in fire death rates will level out, unless additional measures are taken.

What about smoke detectors—or smoke alarms as they are more properly called? Eisenberg does mention them fleetingly in his article. But, aren’t we always hearing about how smoke alarms save lives? Many respected authorities, including veteran fire protection engineer Richard M. Patton, believe that much of their “lifesaving” reputation is largely a coincidence of being introduced at about the same time as the factors described by Eisenberg.

More than that, Patton and a growing number of fire safety experts are on a worldwide campaign to ban the popular—but largely ineffective—ionization smoke alarms. Simply put, photoelectric smoke alarms respond more quickly to the smoldering type fires that are far more common in residential occupancies. Additionally, the ionization units are prone to false alarms caused by steam and cooking vapors.

Sadly, despite eyewash generated by numerous government agencies and NGOs (non-governmental organizations), the superiority of photoelectric devices has been well known for more than 30 years. I myself was involved in the breakthrough Cal Chiefs smoke alarm studies of 1978, which concluded that “Photoelectric alarms provide the best protection against smoke build-up.”

The test will show that the photoelectric alarms operated by household current will activate between 2 and 4%, which is still good. But, the test also will show that many ionization alarms will not activate until the smoke obscuration reaches 10-20 and sometimes 25%. Therefore, because of the present state of the art in detecting smoke, the Subcommittee can take no other course but to recommend the installation of photoelectric alarms.

Bear in mind that at smoke obscuration levels of 20% or higher, self-rescue is virtually impossible. Patton offers a wealth of information—some of it quite disturbing—on his website.

Even if smoke alarms could be effective in warning occupants about a fire, they neither fight the fire, nor guarantee egress. That’s why more than 200 U.S. communities have residential fire sprinkler laws in place. The benefits speak for themselves. In downtown Fresno for example, total fire damage during the 10-year period in which its sprinkler law has been in effect has been only $42,000.

The most surprising thing to come out of our conversation was the affordability of such systems. He quoted me a ballpark price of between $2 to $2.50 per square foot. He also cleared up a few misconceptions about the systems:

I asked Simon why, given both the relatively cheap price and the overwhelming safety advantages, acceptance of residential sprinkler systems has been so slow. He replied:

For a couple of reasons. Most homeowners don’t realize how inexpensive the systems are. Second, a lot of builder/developers don’t want the added cost. They want to go cookie-cutter, instead. In fact, there was a lot of resistance from builder/developers in California to the new law requiring sprinklers in all new residential construction and remodeling.

I would add that there is a whole lot more money in insurance-funded burned home reconstruction than in installing sprinklers in new construction.