A Look At DMSO: Wonder Drug Or Something Less?

A Look At DMSO:  Wonder Drug Or Something Less? 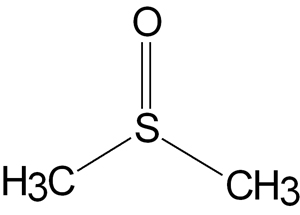 Dimethyl sulfoxide (DMSO) is a high boiling point [372 °F (189 °C)] water miscible, hygroscopic clear liquid, with essentially no odor. The pure compound has a low order of toxicity, with an LD50 for rats of 18,000 mg/kg. The LD50 (median lethal dose) is the dose required to kill half the members of a tested population after a specified test duration. Compare this to the LD50 for ethyl alcohol of 13,700 mg/kg.

DMSO has a number of important industrial applications as a solvent, as well as its increasing usage in the manufacture of microelectronics. Medical application of DMSO derives from work done in the early 1960s by Stanley W. Jacob, MD, who discovered that the chemical exhibits a highly unusual property: It can penetrate the skin and other membranes without inflicting damage. As such, it can be employed as a potent drug-delivery system. For example, DMSO can be used with anti-fungal meds, facilitating penetration of skin and nails.

Its principal medical use is as a topical analgesic, even if it has no FDA approval for such an indication. In fact, the only FDA approved uses are as a preservative of organs for transplant and for interstitial cystitis, a bladder disease. Notably, DMSO finds wide use as a liniment for horses, and carries an FDA approval as “…a topical application to reduce acute swelling due to trauma” in veterinary settings.

Bear in mind that although the pure substance has low toxicity, its skin penetration properties would render less-than-pure formulations potentially quite dangerous, in that all sorts of exogenous substances could easily enter the body. Indeed, all the websites that offer DMSO (non-prescription) give a disclaimer that it is intended for use only as a solvent. And, all descriptions of DMSO offered for prescription dispensing include a disclaimer that it is not approved for any use other than interstitial cystitis.

You might ask why there is no analgesic indication from the FDA. One reason is that on September 9, 1965, the Wall Street Journal reported the death of an Irish woman after undergoing DMSO treatment for a sprained wrist. Strangely, no autopsy was performed, but drug company officials speculated the death was the result of an allergic reaction to DMSO.

According to Dr. Jacob, because of this fatality, the FDA suspended all research on the chemical, “even though they had data in their files on more than 70,000 patients submitted by approximately 1,500 physicians in the US showing its safety and effectiveness.” Cynical observers added that the agency seldom shows such concern over a single death in clinical trials or in connection with approved drugs.

On the other hand, critics of Jacob contend the FDA’s approval of DMSO for the bladder condition was shady. At the time, the exclusive licensee for DMSO medical applications was Research Industries of Salt Lake City, and Jacob was on its board of directors—and a large shareholder—in addition to being the medical monitor for the drug testing. It was further reported that the medical officer charged with reviewing data from clinical trials of DMSO, K.C. Pani, accepted $36,500 in gratuities from Dr. Jacob during this time.

No doubt, there are thousands of testimonials as to the efficacy of DMSO as a topical analgesic, providing temporary and nearly instantaneous relief. Proponents contend that DMSO cuts pain by blocking peripheral nerve C fibers, and cite its use by Olympic athletes and professional sports teams

But, obtaining FDA approval—even under the best of circumstances—for DMSO would not be easy. Although the chemical is odorless, when it is applied to skin it creates a garlic odor. More than that, within a few minutes after being applied to the skin, a garlic or oyster taste can be detected on the tongue. Thus, it would be nearly impossible to design a double blind study, as the placebo could be immediately distinguished from DMSO.

In addition, since DMSO is not proprietary, there is little incentive for a pharmaceutical company to spend the money on clinical trials. A further complicating factor is that DMSO has established a bad reputation within most of organized medicine, owing to the extravagant claims proffered for the drug. Benefits for such disparate conditions as mental illness, emphysema, and cancer have been made over the years.

Proponents counter that approval of DMSO as a topical analgesic threatens proprietary formulations, and the FDA tends to support Big Pharma, as Big Pharma surely supports the FDA. As you can see, the situation is murky.

In the meantime, there are many people with chronic pain who are wary of the consequences of long-term use of sanctioned remedies, whether via prescription or over-the-counter, and are searching for relief. For them, we would advise caution in the use of DMSO, making sure that they purchase only a medical grade product.