A Look At Fracking 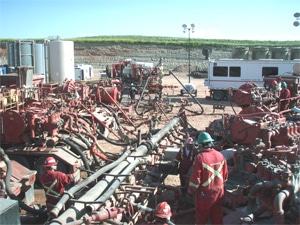 A Look At Fracking

Fracking, short for hydraulic fracturing, is a process used in natural gas and petroleum production, in which a fluid is injected at high pressure into underground rock formations, to facilitate the release of otherwise trapped gas or crude oil. The process originated in the 1940s when gasoline or crude was injected into poorly performing wells, in an effort to increase the flow of product.

Over time, fracking grew more sophisticated—and more effective—when the fluid of choice became water, and “proppants” such as fine sand were added to hold open the fractures. But it was the advent of steerable drill bit motors and telemetering devices, enabling precise control of the process and horizontal drilling—along with a favorable natural gas market—that truly moved fracking into the forefront.

Simply put, fracking allows operators to exploit gas deposits that would have been completely unprofitable in the past. Such sources include coal bed methane, “tight gas” locked into sandstone and limestone, and most notably, shale gas.

Because of fracking, shale gas production increased from 1.3 trillion cubic feet (Tcf) in 2007 to 7.8 Tcf in 2011. According to the US Energy Information Administration, natural gas production in the US will soar from 23 Tcf in 2011 to 33 Tcf in 2040, with the bulk of that being shale gas. Further estimates suggest that our country has sufficient natural gas to last for another 100 years.

Some have already forgotten that before the shale gas revolution, energy prices were rapidly rising, and pundits were predicting that global shortages could promote any number of crises. American shale gas has countered Russia’s energy extortion of its European customers, and has eliminated our dependence on natural gas exports from Iran.

Citing the booming American shale oil and gas production, Citibank estimates that we should be able to reduce our current-account deficit by 1.2 to 2.4 percent of GDP—improving the value of the dollar and boosting economic growth. With abundant shale gas, TD Bank believes that American residential consumers will save $75 billion in home heating and electricity costs in 2013—approximately $650 per household.

Moreover, natural gas has now become the go-to fuel, and is outshining coal for electricity production. As a result, carbon emissions have dropped to levels not seen since 1992. A wealth of information may be obtained from a paper published in the February, 2013 issue of Energy Policy, entitled “Shale gas vs. coal: Policy implications from environmental impact comparisons of shale gas, conventional gas, and coal on air, water, and land in the United States.”

Among the findings cited is that burning natural gas produces substantially less air pollution—including oxides of sulfur and nitrogen, particulates, and mercury—than coal. As such, “A shift from coal to gas would thus reduce the overall likelihood of health problems affecting the nervous system, inner organs, and the brain.” As to workplace safety implications, according to The Economist “In America, a coal miner’s risk of dying on the job is almost twice that of a worker in the oil industry.”

The attitude of the environmental movement toward fracking is…interesting. You may recall not too long ago, that the Greens spoke with great praise of “clean-burning natural gas.” Gas was even referred to as “The bridge fuel to the renewable energy future,” and, its much lower carbon emissions were constantly touted. Note that this praise was lavished on natural gas before the rise of fracking.

All of a sudden, things would change. With the prospect of natural gas becoming plentiful and cheaper, so-called “renewable” sources such as wind and solar now look—to the public at least—as not quite so appealing. The Solyndra debacle was bad enough. Thus, comically exaggerated tales of fracking fluids (within operations thousands of feet lower than the water table) polluting the water, and flaming tap water (actually a result of non-fracking drilling) would be reported by an ever-compliant media.

Sadly, this sort of thing has run rampant with the Greens from the very beginning. A favored agenda is chosen somehow, and the course is set, presumably forever. You know: Any tiny amount of mercury is bad, except if it is contained in a compact fluorescent bulb; Killing birds is a terrible thing, unless it is done by wind turbines; Plastic bags are bad because they don’t recycle—except they do; Beware of food packaging and its nasty chemicals, except if it’s a bacteria-contaminated reusable grocery bag, et cetera.

No one is disputing that fracking will create hundreds of thousands of jobs, and will provide an economic boost in other ways—not the least of which is revitalization of our industrial sector. Listen to Brian Robson, Manager of Operations at FD Johnson Company, a premier supplier of centralized lubrication systems, lubrication pumps, and hose and connector products—vital to fracking operations.

FD Johnson has an integral role to play in this arena, complemented by our technical expertise, commitment to exceptional service and extensive experience. With 80 years of storied history, and as a company with deep roots in the Midwest, we abide by our motto: ‘We keep your machinery running.’ That pledge has tremendous significance for fracking, since a great deal hinges on the quality and maintenance of the equipment used to perform this revolutionary form of energy extraction. We welcome the opportunity to strengthen these efforts.

Just think, clean energy without a government handout. Maybe these fracking guys are onto something.