A Look At Health Communication 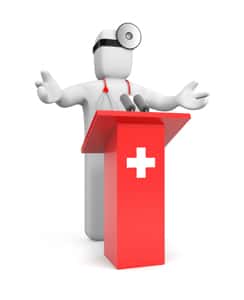 A Look At Health Communication

The CDC defines health communication as “The study and use of communication strategies to inform and influence individual decisions that enhance health.” While enhancing health has always been an admirable goal, the skyrocketing costs of health care—and certainly the involvement of government—has made health communication more important than ever before. The problem is that getting people to change their behavior is exceedingly difficult, and most efforts seem to fail miserably.

The classic example in health care, of course, is that it took more than 20 years for Ignaz Semmelweis’ advocacy of hand washing in medical settings to be widely accepted. Ironically, since his observations were reported before germ theory was mainstream, he was unable to provide a suitable “scientific” explanation for why his methods prevented disease transmission—never mind the truth of his observations. Semmelweis died a broken man, just one more tragic example of Max Planck’s grim observation, even if Semmelweis wasn’t the “opponent”:

“A new scientific truth does not triumph by convincing its opponents and making them see the light, but rather because its opponents eventually die, and a new generation grows up that is familiar with it.”

But sometimes after they see the light, they go blind again. Edward Jenner, not without his detractors at the time, successfully introduced the practice of vaccination in 1796. The most celebrated success in modern times was the Salk/Sabin polio vaccine of the 1950s and 1960s. If there were opponents of the practice back then, they kept a low profile. Sadly, this would change in 1998 with the publication of an absurd paper in The Lancet by Andrew Wakefield et al. which posited that the MMR (measles-mumps-rubella) vaccine causes autism.

There were massive problems with Wakefield’s study, and I mention only a few:

1.     To reach his earth-shattering conclusion, he had only a statistically meaningless twelve children in his study.

3.     Anyone even remotely familiar with the scientific method would realize that the only legitimate way to test the MMR/autism hypothesis would be to compare the incidence of autism in both vaccinated and unvaccinated children. But Wakefield did not do this.

4.     Not revealed at the time of publication was that Wakefield had received considerable funding from plaintiff’s lawyers, and this was not the only ethics problem that would emerge. Wakefield was also accused of fudging the data.

Even worse than this piece of scientific garbage being published, and then in a supposedly “prestige” journal, it took 12 long years for The Lancet to issue a retraction of the paper. Not surprisingly, following the publication of his study, vaccination rates dropped, and there were disease outbreaks and deaths. Numerous studies have conclusively proved that there is no MMR/autism link.

According to Fiona Godlee, editor of the BMJ, “The original [Wakefield] paper has received so much media attention, with such potential to damage public health, that it is hard to find a parallel in the history of medical science. Many other medical frauds have been exposed but usually more quickly after publication and on less important health issues.”

However, to this very day, more than a few parents still believe this tripe—and trying to convince them otherwise is most difficult. Which brings us to a paper just published in Pediatrics, entitled “Effective Messages in Vaccine Promotion: A Randomized Trial.”

The stated objectives of the work were to test the effectiveness of messages designed to reduce vaccine misperceptions and increase vaccination rates for MMR. Four different messages (“interventions”) were tested…

c) Images of children who have diseases prevented by the MMR vaccine;

The results were less than inspiring. None of the interventions increased parental intent to vaccinate a future child. Moreover, even though certain misperceptions were reduced, parents most disposed against vaccination actually hardened their views. As to the dramatic narrative, it only served to increase belief in serious vaccine side effects.

The authors concluded: Attempts to increase concerns about communicable diseases or correct false claims about vaccines may be especially likely to be counterproductive.

People tend to fear what they do not understand, and much research has indicated that a good, believable story will often trump logic. Add to the mix disastrously stupid “expert” health advice of late (advocacy of low salt diets for everyone; the cholesterol/sat fat theory of coronary heart disease), and it’s not hard to comprehend why many folks prefer conspiracy theories.

I’ll give Dr. Gil Ross of the American Council on Science and Health the last word:

“If truthful, calm, and rational communication of the [lack of] risks and manifold benefits of children’s vaccines doesn’t do the job, then I don’t know what will. It’s just possible that some parents have been so inculcated with anti-vaccine conspiracy theories that they are unable to confront the facts even when presented with them in such a well-organized manner. I have no specific advice here, except that we need to keep working to promote public health and reach those resistant parents.”