A Look At Personal Rapid Transit 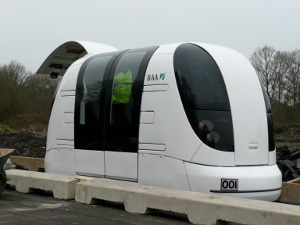 A Look At Personal Rapid Transit

The notion of personal rapid transit (PRT) originated in the late 19th century, concurrent with the expansion of technology and population density in urban areas—even if its development would be interrupted by two world wars. The Advanced Transit Association provides this functional definition of PRT:

Most sources cite 1953 as the beginning of modern PRT. In that year, Northwestern University transportation grad student Donn Fichter became engrossed in PRT and alternative transportation methods. He published a book in 1964 entitled Individualized Automatic Transit and the City, detailing many of his ideas. Of special interest was an automated car system he called “Veyar,” operating much like the above definition. Fichter realized that mass acceptance of public transit would occur only if the system offered flexibility and end-to-end transit times that were much better than current modalities. For him, PRT was the ideal solution.

At about the same time, Dallas contractor Edward Haltom was tasked with building a monorail system, and soon discovered limitations in the conventional approach, that had been around since the 1880s. Based on the requisite start and stop times, a single line could only support 20-40 vehicles per hour. As such, to effect efficient passenger movement, cars would have to be trained to carry hundreds of riders, and the necessary guideways would become large and unsightly. Indeed, they would be no different in appearance from the dreaded “el” elevated trains, common to many urban light rail systems.

One of the first successful PRT systems—opened in 1975 and in continuous operation since 1979—is the Morgantown (WV) People Mover. The system connects the main campus of West Virginia University with Morgantown’s central business district and the two suburban campuses along a linear alignment. In all, there are 8.7 miles (14.0 km) of guideway and five stations. The system has operated with better than 99% reliability, and can be run in either a scheduled or demand-responsive mode. Other current PRT installations include ULTra at London’s Heathrow Airport and the Cybercab podcar system in Masdar City, Abu Dhabi.

An interesting company in the PRT space is JPods, Inc., builders and operators of solar-powered computerized personal rapid transportation networks. The JPod vehicle has the capacity to hold about six people or a cargo pallet, yet it uses 7-15% the energy required by current modes of urban transport such as rail and car.

I recently caught up with founder and CEO Bill James, who gave me more details:

“JPods’ mission is to profitably provide on-demand urban mobility of cargo and passengers within a solar budget. JPods’ patent is for distributed, collaborative computer networks that move physical packets, sort of a Physical-Internet. The company will build the networks, then sell the operational network to a Local Mobility Company (LMC) to operate. JPods will retain a minority share and a license for system compliance with each LMC.”

“Solar-collectors mounted over the rails gather the energy to power the networks. JPods capital costs are also 1/10th that of light rail, can be built in 1/10th the time, operate using 1/10th the energy and can be built with private capital without a burden on taxpayers. A letter of intent has been signed to deploy JPods in Secaucus, New Jersey.”

Bill notes that by suspending the JPods vehicles below the rails, the parasitic mass of the vehicle can be radically reduced. He suggests that the best way to rollout PRT is to “Start small, and iterate relentlessly.” He believes that the best path to growth is to focus on niche markets where cars can be inconvenient and payback would take one to five years, such as between airports and hotels, car rental lots, and parking facilities.

The late Donn Fichter would be proud.