A Look At Skinny Type 2 Diabetics 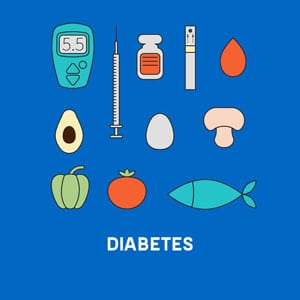 A Look At Skinny Type 2 Diabetics

This column has run several articles on the subject of diabetes, and now focuses on a much-neglected area: Type 2 diabetics who are not fat; or as they are popularly called: “Skinny type 2s.” After all, for the past 20 years, the public has been warned about the dangers of obesity, including the possibilities of developing type 2 diabetes. As to non-fatties, not so much.

The etiology, or at least the partial etiology, in obese people is simple enough. To prevent endless weight gain, excess glucose remains in the blood, rather than being taken up by the cells. This mechanism is aptly demonstrated in the so-called “paradox” of the Pima Indians. The Pimas in Mexico have virtually no obesity, while their American counterparts have the highest rates of obesity and diabetes in the country.

In both cases, they eat the traditional very high carb diet, but south of the border consume far fewer calories, and have a generally more active lifestyle. Likewise, the notion of some foolish proponents of the high carb/low fat diet, that high carb Asians have low rates of diabetes, is of course no longer the case. As living conditions improved, they consumed more calories, and now have soaring rates of diabetes.

Bear in mind that obesity is only one risk factor for diabetes. Not all fatties are diabetics, and interestingly a disease exists (Berardinelli-Seip Syndrome) in which babies are born with essentially no body fat, yet they inevitably become diabetic within a few years.

With population health, the idea is to go with what will improve—on average—the health of the community. The trouble is, an individual’s health is…an individual matter, and almost no one completely fits the stereotypical profile. Indeed, what percentage of type 2s are skinny? Some say 15%. But, how can they be sure?

Consider that every overweight person who goes near a doctor’s office will be tested for diabetes. That is hardly the case for non-obese folks. In fact, most skinny type 2s discover their condition only if they have symptoms, or if they are undergoing an insurance physical or visit a community health screening. Notably, many skinny type 2s will not show symptoms (other than hyperglycemia) for years.

While we’re on the topic of screening, a very quick, no fuss, no fasting technique is to simply take a blood sample, using any consumer blood glucose test kit. If you are over 45, you probably know somebody who has one. Check yourself two hours after a meal. If your blood glucose is higher than 180 mg/dL (9.9 mmol/L), it is very likely that you are a type 2 diabetic. Yes, I know that this is higher than “reference” levels, but this adjustment will make up for stress, unusually large carb-laden meals, etc.

Back to that 15%. No doubt, there are many undiagnosed skinny type 2s out there. My guess would be that the true percentage of skinny type 2s is closer to 25%.

OK, but what causes type 2 in the non-obese? One factor is genetics. Metabolism and glycemic control are complex processes. We certainly recognize a pattern of obesity in families, so why not other metabolic disorders? Another is non-alcoholic fatty liver disease.

For some skinny type 2s, carb restriction does not seem to bring about the dramatic results often touted in programs for the obese. This might be because losing weight via carb reduction is more of a factor than carb reduction per se. I know of one case where a person went on a virtually no-carb diet for three months, and showed an A1C reduction of only 0.6, which unfortunately was not enough to get him into the recommended range.

There is extremely limited literature on skinny type 2s, but the topic is slowly gaining interest. We will revisit this matter. In the meantime, even if you are not overweight, get tested!