A Look At St. John’s Wort

A Look At St. John’s Wort 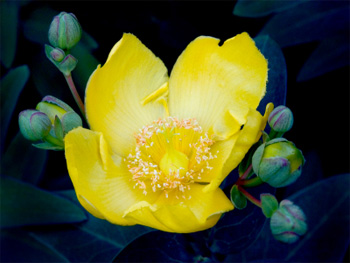 An herbal remedy dating back to ancient Greece, if not earlier, Hypericum perforatum, popularly called St. John’s Wort (“wort” means plant), has been used to treat a variety of conditions, and in recent years has been widely touted for management of depression. Named after St. John the Baptist, numerous explanations are proffered for how this came about. As it happens, the feast day of the nativity of the Baptist is June 24th, and the plant is then in full bloom. Perhaps its five petals resemble a halo, and its red sap was taken to symbolize the blood shed by this martyr.

At one time it was believed that if you slept with a sprig of the plant under your pillow the night before the feast day, the saint would bless you in a dream, thus preventing you from dying during the following year. One assumes that this particular belief did not persist for too long.

Hundreds of studies have been run on this herb, testing its efficacy on all sorts of illnesses, with a significant number showing good results with mild to moderate depression. The herb inhibits the reuptake of three of the four known feel-happy neurotransmitters: serotonin, norepinephrine, and dopamine. When compared with tricyclic anti-depressants such as imipramine, amitriptyline, doxepin, desipramine, and nortriptyline, St. John’s Wort is equally effective, and has fewer side effects.

Some authorities claim that its relatively gentle mode of action is due to its effects on three neurotransmitters—not just a single one such as the well-known selective serotonin reuptake inhibitors (SSRIs) including fluoxetine and sertraline. Notably, research suggests that St. John’s Wort causes fewer side effects than the widely-prescribed pharmaceutical SSRIs.

What side effects that do occur are usually mild. The most frequent are stomach upset, hives or other skin rash, fatigue, restlessness, headache, dry mouth, and feelings of dizziness or mental confusion. Less commonly reported is the effect of making skin overly sensitive to sunlight (photodermatitis). In fact, it is recommended that light-skinned individuals on a long course of the herb be particularly careful about sun exposure. Bear in mind that interactions with other drugs and herbs can occur.

Further indications for the herb—albeit not having nearly as much clinical study support—include bacterial infections; premenstrual syndrome; seasonal affective disorder; pain from an ear infection; and one of its most ancient uses as a topical agent for wounds, minor burns, and hemorrhoids.

As to its proven efficacy with mild to moderate depression, one might ask why St. John’s Wort is not more readily accepted by mainstream medicine in America. Indeed, the bulk of the clinical trials have been done in Europe.

Acceptance or not, millions of Americans self-prescribe this herb every day—some no doubt refugees from pharmaceutical side effects. While there is not a grand conspiracy against herbs arranged by Big Pharma, it is incontrovertibly true that the pharmaceutical industry exerts a huge influence on medical research, education, and therapeutic practices. And, it must be said, many Americans are quite imbued with the notion that the answer to all health problems is the frequent ingestion of pharmaceuticals.

Since herbs cannot be patented, there is little incentive for expensive and exhaustive clinical trials to be done in the US. Although the FDA does regulate herbs, the process is not nearly as stringent as it is for pharmaceutical drugs, thus it is not uncommon to hear about contaminated herbal products, or preparations that do not contain the labeled amounts of the extract.

St. John’s Wort—like most herbs—is chemically complex, making it difficult to identify its active ingredients and its precise mode of action. Its principal chemical constituents are antioxidant polyphenols and flavonoids, including biapigenin, catechins, hyperforin, hypericin, proanthocyanidins and quercetin. Probably, many of the compounds in St. John’s Wort act in concert, or synergistically.

Regarding depression, there is some evidence that poor nutrition, especially regarding B vitamins, might be a cause. And, while no one argues against treating chronic and severe depression, a number of health professionals wonder whether behavioral problems—such as mild depression, social anxiety, and shyness—should be medically treated. Or, as one writer put it: “Are drugs a cure for life?”

Serotonin levels can be raised with vigorous exercise, and the production of serotonin stays at a higher level for a few days after the activity. A diet deficient in omega-3 fatty acids may lower brain levels of serotonin and cause depression. Complex carbohydrates raise the level of tryptophan in the brain resulting in a calming effect. Vitamin C is also required for the conversion of tryptophan into serotonin.

Thus, non-drug, and even non-herbal means are available for many of those with mild depression.