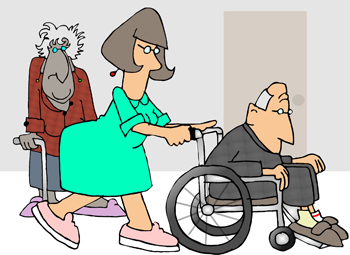 While many of my columns have focused on organic aspects of health care, such as infection control, vaccinations, antibiotics, nutrition, and various alternative therapies, we should never lose sight of the real 500-pound gorilla—health care funding. Indeed, paying for the health care needs of our population as it grows older and sicker is the biggest political time bomb of all.

As with any looming crisis, there is never a shortage of remedies being proffered, but one that should be viewed with a great deal of skepticism is the proposal that Medicaid rolls can best be reduced by getting poor people to purchase private long-term care insurance.

For the most part, Medicare does not cover long-term care, so Medicaid (known by other names in certain states, such as “Medi-Cal” in California and “MassHealth” in Massachusetts) is the government program most affected by long-term care (LTC) needs.

Even the most ardent advocate of limiting government social welfare programs will acknowledge that in a country of 300 million people, there will be some genuinely needy individuals, who are confronted with the twin realities of inability to pay for LTC insurance, and are too sick to qualify in any event. According to the American Association for Long-Term Care Insurance, one in five Americans who applied for LTC insurance in 2005 was denied. As it happens, this high figure is skewed by the age of the demographic that tends to apply for the coverage, although that is changing, per a November, 2007 news release:

“The average age of Americans purchasing individual long-term care insurance protection is now 58,” states Jesse Slome, the Association’s Executive Director. “That’s a significant change from as recently as 2000 when the average age was 67.” Increased public understanding of the importance of planning prior to retirement and lower costs available at younger ages are factors impacting the trend.

Fair enough. But there are some who feel that this sort of growth is too slow. Stephen Moses founded the Center for Long-Term Care Reform, Inc. in 1998, as a presumably independent, objective think tank and public policy group. Upon closer examination, though, his Center looks more like a tout for selling LTC insurance, that targets those most vulnerable—Medicaid recipients. Moses also consults to various agencies to tighten up their Medicaid programs.

Of course, it would be deemed heartless to go after the poor, disabled, and sick directly, so Moses claims that those who could otherwise afford private insurance are transferring assets to qualify for LTC through Medicaid. And, he blames Medicaid for the slow growth in LTC insurance sales. In a Forbes interview he said that…

Not exactly. Take a look at state eligibility requirements, and try to imagine people at these low incomes paying $2,000 to 3,000 per year for a policy that covers nursing home care and home care (figures from AARP). As to the transferring assets bit, listen to the Government Accountability Office, from a March, 2007 report entitled Medicaid Long-Term Care…

“Few had transferred assets before applying for nursing home care…Nationwide, HRS data [The Health and Retirement Study, sponsored by the National Institute on Aging] showed that, at the time most elderly individuals entered a nursing home, they had non-housing resources of $70,000 or less—less than the average cost for a year of private-pay nursing home care.”

“The argument that something needs to be done about abuses of the Medicaid eligibility rules is not supported by the facts. The studies reviewed in this paper do not support the claim that asset transfers are widespread or costly to Medicaid, or that restricting Medicaid eligibility would substantially increase savings or purchases of private long-term care insurance…The fact is that Medicaid is what it was intended to be, a safety net for those who cannot afford to pay for long-term care.”

And what about the reverse Robin Hood? Uncomfortably similar to the practice of targeting poor people to receive credit cards, knowing that they would not pay promptly, and thus fall into 26% interest rates, some in the LTC insurance field would target those least able to afford it and likely just rebound back into Medicaid—under the cloak of health care reform.