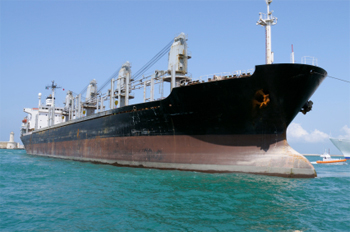 Even thousands of tons of water are but a drop in the ocean, but scientists are taking a hard look at what happens when the ballast tanks of ships are pumped out. In lakes and oceans, every milliliter of surface water contains about 102 protists (certain protozoa and algae), 106 bacteria, and between 107 and 109 viruses. Do the math and you’ll conclude that hundreds of trillions of microorganisms enter a single ship’s ballast tanks during normal operations.

According to Professor Fred Dobbs—of Old Dominion University in Norfolk, VA—as reported in the May, 2008 issue of Microbiology Today:

“Ships pump water in and out of ballast tanks to adjust the waterline and compensate for cargo loading, making the ship run as efficiently as possible. These tanks can hold thousands of tons of water. “Any organisms in the water are likely to be released when it is next pumped out.”

There are two well-known examples of the damage that can occur when non-indigenous species are introduced into new environments in this manner. The zebra mussel, native to freshwater lakes of southeast Russia, appeared in the Great Lakes in 1988—courtesy of ballast tanks emptied into the St. Lawrence Seaway. With few natural predators in its new home, the mussels wreaked havoc.

A particular species of the so-called comb jelly Mnemiopsis leidyi, native to the North Atlantic, was brought into the Black Sea via ballast water and flourished. It only took ten years for the region’s anchovy fishing industry to completely collapse, since the comb jelly fed on exactly the same species of plankton as the anchovy larvae.

The big question is whether introducing non-indigenous microbes can trigger the same ill effects. No doubt, the majority of microbes hitching a ride in the ballast tanks are harmless, but some do pose health risks.

Dobbs notes that, “Vibrio cholerae, which causes cholera in humans, can be carried in ballast tanks. There have been no known outbreaks of disease associated with ballasting activities, but the water is only sampled very rarely.” Numerous other pathogenic bacteria have also been identified in the tanks, along with several species of harmful algae.

While some authorities hold that there is really no such thing as a non-indigenous microbe, others believe that at least certain microbial species do have a biogeography. Scientists on that side of the debate cite examples of two species phytoplankton known to be native to the East China Sea and North Pacific coasts respectively, ending up in the English Channel and coastal Europe.

Regardless of how this debate turns out, the International Maritime Organization (IMO), a group that sets rules and standards for the global shipping industry, is taking no chances. IMO has issued an “International Convention for the Control and Management of Ships Ballast Water and Sediments,” up for ratification by the member countries. Included in the convention is a limit put on the numbers of Vibrio cholerae, E. coli, and intestinal enterococci contained in discharged ballast water.

Various technologies are available to kill the microbes, including filtration, biocides, ultrasound, and UV-radiation. But, any treatment will have to be harmless to the steel ballast tanks, and the water will still have to meet harbor discharge standards.

Although the spread of marine organisms via shipping dates back to ancient times, it is only now that we can fully understand and hopefully mitigate the problems caused.