Mono A Mono: Ain’t Nothin’ Like the Rail Thing

Mono A Mono:   Ain’t Nothin’ Like the Rail Thing 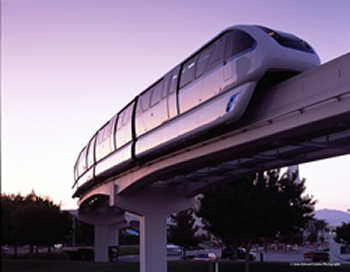 Anyone who has lived in a big city has heard about dozens of dubious, expensive, and scientifically unsound “solutions” to America’s problems of traffic, excessive energy demand, and air pollution. Are you ready for one that actually works?

The answer, despite the aggressive efforts of adherents, including blatantly misleading propaganda, is not greater use of hybrid automobiles, or solar or wind power. As nice as they might make people feel, hybrid cars are little more than a glorified status symbol, and those alternative sources of energy will barely make a dent. Rather, the easiest, safest, and most effective way to alleviate gridlock and save taxpayers billions of dollars is through the use of monorails. Yes, monorails.

These trains, unlike subways, do not require massive construction, nor do they take years to implement. And, notwithstanding their image as transportation vehicles of the future, monorails are nearly 100 years old, having generated widespread support in Europe, Asia, and select portions of the United States. In a city such as Los Angeles, to cite just one example, a monorail would be the elusive panacea that politicians routinely seek for the area’s notoriously bad traffic. Alas, the opponents of a monorail have their own agenda, none of which will solve urban congestion and pollution.

But, think this through. Disneyland is over 50 years old, and its monorail typically services thousands of people per day in a seamlessly efficient and quiet manner. In fact, Disney considered a number of ways to move people around his theme park before settling on a monorail system. Yet, possibly owing to his outsider reputation in the movie business, or his enlightened amateur rather than credentialed approach to science and engineering, many think that because Walt Disney endorsed monorails, the idea must somehow be flawed.

True, some of the most popular monorails, such as the one in Seattle, did begin at the World’s Fair. As Brendan I. Koerner, of the New America Foundation, writes:

“The monorail’s image wasn’t helped by two successive World’s Fairs—Seattle in 1962 and New York in 1964—that featured monorails as futuristic centerpieces. The technology just couldn’t shake the stereotype of being too fanciful for real-world straphangers. For the ‘Train of Tomorrow—Today!’ tomorrow never seemed to come.”

Koerner, himself a monorail supporter, is right. Critics like to think of the monorail, with its fast-forward design and theme park history, as something that will just never manifest itself in the real world. Even so-called environmentalists rarely trumpet the benefits of monorails. Perhaps they are put off by Disney’s supposedly reactionary politics. Still, they should be thinking of the benefits.

1.    Monorails do not take a long time to inaugurate. The system is as close to plug-and-play as any mass transportation modality will probably ever get.

2.    Monorails are inherently safe. There are no collisions with cars, and the total number of fatalities related to monorails worldwide is fewer than ten.

3.    Monorails are exceptionally quiet. They use rubber wheels and glide effortlessly.

4.    Monorails are not, like subways, a source of graft and political delay. Monorail systems actually turn a profit.

Ray Bradbury, the acclaimed author, recently penned an Op-Ed in the Los Angeles Times covering many of these same points:

“The monorail is extraordinary in that it can be built elsewhere and then carried in and installed in mid-street with little confusion and no destruction of businesses. Compared to the heavy elevateds of the past, the monorail is virtually soundless. Anyone who has ridden the Disneyland or Seattle monorails knows how quietly they move.”

“As soon as possible, we must call in one of the world’s monorail-building companies to see what could be done so that the first ones could be in position by the end of the year to help our huddled traffic masses yearning to travel freely. The freeway is the past, the monorail is our future, above and beyond.”

Here’s to such a future. For once, the commute would be safe, quick, affordable, and fun. With any luck, someday soon we will hear “All aboard!” on the monorail, in a city near you.