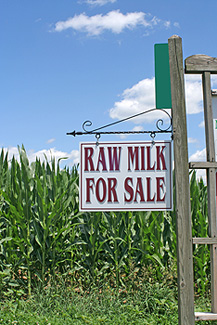 Just when you think a topic has disappeared from the news cycle, it pops right back in. Mark Nolt, a Cumberland County, Pennsylvania dairy farmer, was recently accused by state officials of selling raw milk illegally. The state departments of Agriculture and Health confiscated more than $25,000 worth of equipment and products from Nolt, who refuses to obtain the required permit, and is in violation of a court order. Pennsylvania currently has more than 70 businesses with permits to sell raw milk, according to the state Department of Agriculture.

In June of this year, state officials ordered Nolt to stop selling raw milk after testing determined that three samples of milk from his farm showed unacceptable levels of bacteria.

Speaking like someone who stepped out of a time warp, Nolt said he won’t sign the permit and resents giving the state the ability to shut his farm down—something he claims the permit could allow if inspectors don’t like what they find.

So-called raw milk is simply milk as it comes directly out of the cow, in its natural and unpasteurized state. Pasteurization—named in honor of Louis Pasteur—as now practiced requires heating the milk for 15 seconds at 161 °F (71.7 °C). The process kills pathogens, as well as most of the bacteria that could cause spoilage. The process conditions are based on the parameters necessary to kill Mycobacterium tuberculosis.

“Certified” milk, is raw milk obtained from cows certified as healthy, with a bacteria count below a specified standard. Of course, it still can contain significant numbers of disease-producing organisms.

Advocates of raw milk tout various health benefits that pasteurization removes, but are generally silent on the issue of bacterial contamination. We will stipulate that pasteurization removes 10-30% of the heat-sensitive vitamins (vitamin C and thiamine—although milk is not a particularly good source for these nutrients) and may remove certain enzymes that render milk easier to digest for some individuals.

A protracted effort to regulate the sale of raw milk ran from the mid-1970s through nearly the end of the 1980s, and involved numerous federal agencies, state governments, health and consumer associations, and advocates from both sides of the issue. Much of the real fireworks concerned California’s Alta-Dena Dairy, and repeated state-issued recall warnings over Salmonella contamination.

Some interesting epidemiological facts emerged during the FDA hearings…

Between 1990 and 2004, U.S. health authorities traced 168 disease outbreaks to dairy products; nearly a third were linked to unpasteurized items, according to the nonprofit Center for Science in the Public Interest.

According to the Centers for Disease Control:

“Abundant evidence has shown that raw milk serves as the source of bacteria that cause outbreaks of disease in humans: in recent years, most frequently salmonellosis and campylobacteriosis. In the investigations of such outbreaks, the epidemiologic evidence, combined with knowledge about the occurrence of specific pathogens in cattle and the isolation of some of these pathogens from raw milk, leaves no doubt that raw milk is a vehicle for disease in humans.”

Raw milk advocates have been known to get quite creative with disease-reporting statistics, and often claim that Salmonella contamination can affect other foods such as poultry. But then, no one eats raw poultry. Beyond that, they also try to claim that a few bad apples are tarnishing their entire business, although Alta-Dena was the leader and tarnished themselves pretty well.

The FDA banned interstate sales of raw milk 20 years ago but left it up to individual states to decide what to do about commerce within their borders. Supposedly, 23 states prohibit the sale of raw milk to humans. Still, the present situation is a hodgepodge of conflicting rules and loopholes big enough to drive a milk truck through.

“Milk sold for animal feed should not be consumed by humans. If you feed this to your family you are putting them at risk, especially young children and pregnant women. The pasteurization process inactivates dangerous pathogens and has saved millions of lives. We are generations removed from the days before pasteurization was available. Some people have forgotten or are unaware of the problems and dangers arising from unpasteurized milk.”

Well said. This is one case where natural is NOT better.