New Pathways In The Treatment Of Non-Small Cell Lung Cancer

New Pathways In The Treatment Of Non-Small Cell Lung Cancer 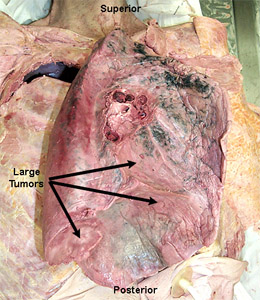 Lung cancer is the leading cause of cancer-related mortality in both men and women in the United States and throughout the world. Non-small cell lung cancer (NSCLC) accounts for approximately 85% of all lung cancers. Sadly, most cases of lung cancer are diagnosed at an advanced stage, conferring a poor prognosis.

As it is, only about 16% of NSCLC patients are diagnosed early enough to be eligible for surgery. Most of the rest undergo some form of chemotherapy. Overall, fewer than 5% of advanced non-small cell lung cancer patients survive five years.

Not surprisingly, given the impact of NSCLC, more than 800 active clinical trials are currently listed on the National Cancer Institute’s website. There are three principal phases of clinical trials, as follows:

Should Phase III results be positive, the next step is filing a New Drug Application, for eventual FDA approval. Occasionally Phase IV trials are run, to evaluate the side effects, risks, and benefits of an already approved drug over a longer period of time, and in a larger number of people than in phase III clinical trials.

Typical first-line therapy (the initial treatment used) for advanced NSCLC patients in the United States is paclitaxel plus carboplatin. There are many possible side effects including nausea, increased risk of infection, anemia, and hair loss. Carboplatin can cause kidney damage, while paclitaxel can cause aching joints and muscles, and lowered blood pressure.

An examination of Phase III clinical trials published from 2001-2008 reveals that the one-year survival rate for patients receiving paclitaxel and carboplatin first-line therapy was on average only about 40%, the weighted average for median survival was 9.7 months, and the objective tumor response (defined as greater than 30% tumor shrinkage) rate was about 27%.

Could the efficacy of these agents be improved, and the side effects lessened? Novelos Therapeutics, Inc., a New England-based biopharmaceutical company, certainly thinks so. The company’s lead product, NOV-002, is presently in a Phase III clinical trial, with top-line trial results expected later in the first quarter of 2010.

NOV-002 acts in conjunction with paclitaxel plus carboplatin as a chemopotentiator and a chemoprotectant. Thus, NOV-002 makes the chemo more effective, while lessening the side effects. NOV-002 is already approved in Russia, where excellent results have been observed. Related Russian Phase II trials demonstrated that NOV-002 increased the one-year survival of advanced NSCLC patients from 17% to 63%, and improved tolerance of chemotherapy.

Additional studies suggest that NOV-002 efficacy is not limited to particular types of tumors, or chemotherapy agents.

Novelos president and CEO Harry Palmin is enthusiastic. “We are on track for our pivotal Phase III trial to conclude this quarter. “Should this registrational trial be positive, we will proceed with filing a New Drug Application (NDA) in 3Q 2010. Thereafter, based on our Fast Track designation, we would project FDA approval for first-line treatment of advanced NSCLC in combination with chemotherapy in 1Q 2011.”

Other promising new approaches in chemotherapy involve attaching the drugs to monoclonal antibodies, which could afford benefits in efficacy and reduction of side effects. These antibodies can be designed to bring the chemo agent directly to the tumor. Similar benefits are said to occur with liposomal therapy, whereby the drugs are packaged inside liposomes (synthetic fat globules).

With annual diagnoses of NSCLC in the United States approaching 200,000 and the annual death toll close to 150,000 any improvements in therapy are surely welcomed, but we still have a long way to go.