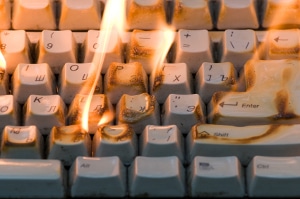 Besides the government shutdown, the biggest news story these days has been the epic failure of healthcare.gov. Among the many ironies currently in play is that even though President Obama refuses to delay the individual mandate, his catastrophe of a website has achieved this very thing—the stated goal of his opponents!

We first heard that the difficulties were caused by too many people trying to access the site at the same time, and in some circles, this is still the cover story. However, it becoming abundantly clear that the problems go far deeper. Database guru Luke Chung—of FMS, Inc.—has been widely quoted in the media, and his soundbites are pretty mordant:

It wasn’t designed well, it wasn’t implemented well, and it looks like nobody tested it. It’s not even close. It’s not even ready for beta testing in my book. I would be ashamed and embarrassed if my organization delivered something like that. People higher up are given the excuse that there are too many users. That’s a convenient excuse for the managers to pass up the chain.

Chung and others have noted that the initial registration process is foolishly complicated, involving multiple secret questions, when the best thing would have been to generate a quote as quickly as possible. Then, if the applicant is interested, more security can be piled on. Further complaints involve loss of data, including an absurd provision whereby all data is lost if you do not respond to the registration confirming e-mail within 30 minutes. That’s about as user-unfriendly as it gets, folks.

The last time I tried the site, it was easy enough to get on, but my account creation failed for reasons that were incorrectly explained in the ensuing error message.

Apparently, the bulk of the money put forth by the Feds on this thing was awarded on a less than robustly competitive basis to a Canadian company, CGI, that specializes in business consulting, systems integration, and IT outsourcing services. Most of CGI’s clients are in financial services, oil and gas, public utilities, and government. Not exactly a list of enterprises that can tout widespread consumer satisfaction in their related IT experiences.

So, how did they get the job? You might not like the answer. In the world of big time federal contracting, the winners are quite often those bidders who are more skilled at navigating the Byzantine procurement system than in delivering the particular goods or services required. In the case of IT, it has long been known that the Feds have a bad habit of buying outdated, costly and buggy technology—from the usual suspects, spending around $80 billion per year.

Here is a typical tale of a big federal IT rollout (the Army in this case), and why things take forever to get fixed…

I worked in a major center during the Enterprise Email migration and I can tell you it is nothing short of a catastrophic failure. It is unreliable, it causes Outlook to hang and crash routinely, and messages are severely delayed or outright lost with no explanation.

The reason you and all other [senior executive service] and [general officers] think it is a success is because somewhere a room full of guys like me are bending over backwards to make sure that you guys get the absolute best possible service and that even the slightest hint of a glitch is taken care of before you ever even think about noticing it. You never see any of this action, and your subordinates won’t dare tell you it’s happening, but you can rest assured that it is. Meanwhile, all the rest of us are left to fend for ourselves on an overworked and unreliable infrastructure that is crumbling under its own weight.

But, let’s fast-forward to that point when the enrollment process is working flawlessly. To coin a phrase, be careful what you wish for.

Serious concerns have been raised about privacy, and a quick look at the Individual Privacy Act Statement will surely give you pause. In truth, though, most of these pitfalls were in play before the enrollment website was launched. As part of Obamacare, the Federal government has access to the health records from all private insurance companies. Thus, any “authorized” individual—and that means tens of thousands of people, across multiple agencies and contractors—can see your most personal medical information. Doctor/patient confidentiality exists no longer.

Consider one example. What if you tell your doctor that you have been using a bit of cocaine, but now want to stop? Congratulations! The DEA and other law enforcement agencies will know all about you. Under these rubrics, people will carefully censor discussion of their medical histories, thus compromising their care. Ponder that for a moment, and then ask yourself how anyone in health care could have bought into it. The information sharing will increase exponentially once enrollment is working properly.

Some observers are even calling the enrollment site a Trojan horse, whose primary purpose is to get your private information; selling you health insurance is a secondary concern. Before you dismiss that as paranoia, please explain why on sites like ehealthinsurance.com, you can get a rate quote without first divulging specific personal information.

IT insider blogs are speaking of critical design flaws, structural data failures, and data synchronization impossibilities. Absent a miracle, these are not problems that can be easily resolved, regardless of how much money is spent.

May you live in interesting times.