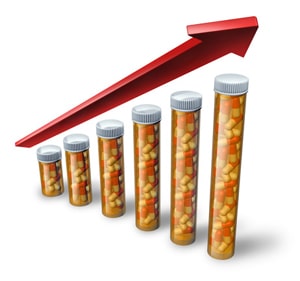 We won’t bury the lede. “National Health Spending In 2014: Faster Growth Driven By Coverage Expansion And Prescription Drug Spending.” That’s the title of an article from the January, 2016 print version of Health Affairs, published online December 2nd. Here are a few key findings…

2.     The 2013 growth in spending figure was 2.9 percent. 2014’s higher growth in spending rate is due mostly to the major coverage expansions under the Affordable Care Act, particularly for Medicaid and private health insurance.

3.     Retail expenditures on prescription drugs increased by 12.2 percent in 2014. Analysts pointed to the outrageously expensive Hep C drugs–Sovaldi and Harvoni from Gilead Sciences–as a factor. Prescription drugs account for around 10 percent of healthcare expenses.

If the $3.0 trillion didn’t blow your mind, consider that education, which involves a whole lot more people than healthcare, and can hardly be described as “efficient,” consumes only 7.3 percent of the GDP (OECD figures). You might recall that champions of the Affordable Care Act assured us that it would reduce the cost of healthcare. Their position now is a bit different: The cost increases would have been even higher without it.

“Millions of uninsured Americans gained healthcare coverage in 2014,” CMS acting Administrator Andy Slavitt said. “And still, the rate of growth remains below the level in most years prior to the coverage expansion, while out-of-pocket costs grew at the fifth lowest level on record.”

Notice how ACA cheerleaders attempt to obfuscate the findings. More people are availing themselves of healthcare under the ACA, but that was a given. Indeed, before the passage of the ACA, many people questioned how we could bring an estimated 30 million more people into the system, and simultaneously also lower the costs. Bear in mind that the per capita costs have also increased.

Ponder the nebulous statements of Slavitt. What sort of “coverage” is he talking about? Obviously, all plans are not equal, and a goodly number of those who gained coverage went onto Medicaid. Millions of others saw their previous plans, including Medicare, reduce benefits. How less specific could he have been on the rate of growth than “most years prior to coverage expansion”? Which years? How many years? Regarding out-of-pocket costs, how informative or meaningful is “the fifth lowest level on record”?

Considering that the Centers for Medicare and Medicaid Services (CMS) have an entire department devoted to healthcare statistics (Office of the Actuary), Slavitt’s remarks could–and should–have been more definitive. Hiding in plain sight is the fact that CMS essentially runs all American healthcare, “private” or otherwise. The Health Affairs article cited at the beginning of this piece was written solely by CMS officials.

Another favorite tactic of ACA fanboys is to admonish us that the ACA is about much more than insurance coverage–and it surely is. In essence, it is a power grab to gain control of an activity that makes up more than 17 percent of the GDP. And yes, there are provisions for increasing quality of care; improving payment accuracy; expanding preventive measures and corporate wellness programs; increasing the healthcare workforce (mostly through mid-level providers); modest improvements to the medical residency program; and outcomes research.

Interestingly, though, you don’t hear much about these other provisions, do you? Related to outcomes research is the matter of so-called Accountable Care Organizations, and these ACOs do get publicity. An ACO is network of doctors and hospitals that coordinates medical services for a specific patient population. The Feds set certain benchmarks for quality and spending. If the ACO meets the quality guidelines and has money left over, it gets to keep it. Otherwise, it must pay a penalty. In theory, then, there is an incentive.

Just last May, our friends at HHS announced that the “Pioneer Accountable Care Organizations,” under the Affordable Care Act, have saved Medicare $385 million. Trouble is, this figure has been widely contested, and when put to analysis by non-government sources, was reduced to around $42 million. More than that, the biggest savings came from ACOs that had the highest costs to begin with. Missing from HHS’ announcement was that 13 of the original 32 handpicked ACO groups dropped out.

Further and continuing ACO savings would likely come from flat-out rationing of care. As it is, a survey run by The Physicians Foundation found that only 13 percent of the docs believed that ACOs could enhance quality and decrease costs simultaneously. But what would physicians know about healthcare, compared to administrators, bureaucrats, and software peddlers?

Tell me if you’ve heard this one: “I’m from the government, and I’m here to help.”