One More Look At Thimerosal

One More Look At Thimerosal 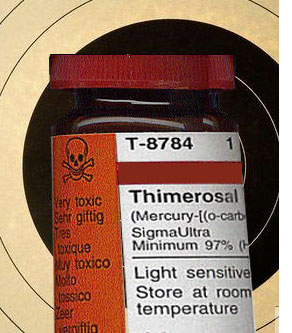 Of all the articles I have written for Health News Digest, none has come even remotely close to generating the amount of e-mail I received on a November, 2006 piece entitled “Anti-Vaccination Hysteria – Undoing Progress.” A portion of that article discussed the fervent devotion some parents of autistic kids have to the notion that vaccination—and notably the mercury-containing preservative Thimerosal—caused the affliction.

Indeed, no matter how much data could be piled up, the zealots would not be swayed, and would blow off the mountain of contrary evidence as being part of some Big pharma/government conspiracy. On the other hand, they would cite highly questionable studies of their own, and fear entrepreneurs such as Robert F. Kennedy, Jr. Presumably, Kennedy’s dog in this fight was to enlarge his interest group that rails against mercury coming from coal-fired power plants.

Meanwhile, for the general public, confusion reigned supreme, since additional factors are in play here. The criteria for a diagnosis of autism has been expanding, and many studies that researched any link between Thimerosal and autism not only had to set sometimes highly arbitrary conditions, they also used arcane statistical analysis. To be sure, statistics are vital in epidemiological studies, but they can also be misused to achieve a set of desired results.

There are many ways to do this, and I have seen it in published academic papers as well as in self-contained work by regulatory agencies. I have seen agencies throw out the entire male portion of a statistical cohort for no reason, other than it seemed to bolster their case. In another example, researchers looking for a link between a particular chemical and a rare type of bone cancer actually cherry-picked their cohort and then worked backwards to achieve their so-called correlation!

Sometimes, though, the conditions exist whereby virtually incontrovertible conclusions can be drawn, and little if any statistics—beyond simple record keeping—is needed. Or, as Steven Milloy puts it, “A classic test in epidemiological study is to observe what happens to the rate of disease when the suspected agent is removed.”

Well, this very study was published in the January, 2008 issue of Archives in General Psychiatry, and was put together by the Immunization Branch, California Department of Public Health. The study acknowledges that…

Previous analyses of autism client data reported to the California Department of Developmental Services (DDS) have been interpreted as supporting the hypothesis that autism is caused by exposure to the preservative thimerosal, which contains ethyl mercury.

Since Thimerosal had been removed from all childhood vaccines (except for a tiny amount left in flu vaccines) as of March, 2001, the authors looked at time trends in the prevalence by age and birth for all children with autism who were active status clients of the California Department of Developmental Services (DDS), over the period January 1, 1995 through March 31, 2007.

Here is what they found:

The estimated prevalence of autism for children at each year of age from 3 to 12 years increased throughout the study period. The estimated prevalence of DDS clients aged 3 to 5 years with autism increased for each quarter from January 1995 through March 2007. Since 2004, the absolute increase and the rate of increase in DDS clients aged 3 to 5 years with autism were higher than those in DDS clients of the same ages with any eligible condition including autism.

In other words, Thimerosal was removed, and autism kept increasing. Michael Fumento reported that a few “experts” jumped the gun in 2002, claiming huge drops in autism diagnoses, but this bit of statistical chicanery was taken too early in the game.

I purposely waited a few months to post this article, allowing for any blowback. The only recent study in PubMed is a Poisson regression analysis of birth cohorts from 1990-1996, but this seems moot. I did notice that a few of the Thimerosal lawsuit websites have either gone dark or advise that they are not taking any new cases.

Maybe this California study will finally put the stake through the heart of the alleged Thimerosal/Autism connection.