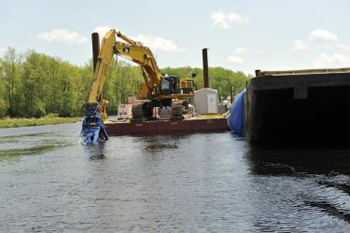 After more than seven years of planning and preparation, General Electric’s $750 million Hudson River Dredging Project hit the water on May 15, 2009. This giant effort, though, was temporarily suspended on August 7th, when it was discovered that the PCB levels in the river had exceeded allowable standards. Very likely, the dredging operations themselves had disturbed the silt such that some already encapsulated PCBs were released. Dredging resumed on August 11th.

Beginning in the 1940s, GE used PCBs (polychlorinated biphenyls) as an insulating fluid in electrical capacitors manufactured at plants along the river at Hudson Falls and Fort Edward, NY. As a result of various processes, PCBs were legally discharged into the river. The company discontinued its use of PCBs in 1977, based largely on pioneering work done by Dr. Renate Kimbrough and her associates in the mid-1970s, showing carcinogenic effects of PCBs (at high doses) in laboratory rats.

EPA’s decision to go ahead with the dredging project late in 2001 brought out much local opposition. Signs were posted everywhere saying “No Dredging” and “Stop the Dredging.” Polling data showed overwhelming opposition to the project. As writer Bonner Cohen put it…

“People don’t want to see their quiet communities transformed into a giant excavation site, complete with unsightly dredging rigs befouling the river and trucks loaded with smelly, oily sludge rolling through their neighborhoods for years to come.”

Local activist Tim Havens was quoted at the time…

“What really galls me is that none of the people responsible for this decision—former EPA Administrator Carol Browner, current Administrator Christie Todd Whitman, and New York Gov. George Pataki—ever bothered to come up here and listen to our concerns.”

Havens is still active on this issue. He now says that “they are torturing this river,” and believes that the re-suspended PCBs will just settle somewhere else, creating new problems. “It is like taking a cloth to a dusty countertop and pushing it all over the place,” he says.

As to GE, they were certainly against the project in 2001. This is what Stephen D. Ramsey, vice president of GE’s Corporate Environmental Programs, said in April of that year…

“It is incomprehensible that, in a river EPA says is safe for drinking and all recreational activities, and where conditions continue to improve, EPA proposed a plan which could destroy the river in a misconceived attempt to save it. The facts clearly demonstrate that source control and natural recovery are the most important factors in reducing PCB levels in fish in the Upper Hudson River. Dredging is less effective and will be more harmful.”

Ramsey did not mince any words…

“In 1984, EPA rejected dredging in the Upper Hudson because it said it would be devastating to the ecosystem, dredging technology could not adequately control re-suspension, and PCB levels in fish were declining. Since then, PCB levels in fish have declined an additional 60% and EPA’s own model predicts an additional 50% decline in the next 10 years. In pursuing this ill-advised and potentially dangerous course of action, EPA is closing its eyes to the evidence that PCB levels in fish are declining, and that dredging presents real, proven risks to local communities.”

What about the science behind all of this?

In 1999, the Agency for Toxic Substances and Disease Registry (ATSDR)—a unit of the CDC—concluded that “The weight of evidence does not support a causal association for PCBs and human cancer at this time.”

The agency reviewed numerous papers to reach this conclusion, including a 1999 study—the largest ever conducted on a population of workers heavily exposed to PCBs. The lead author of this particular effort was the same Renate Kimbrough who had done the rodent work more than 20 years earlier. Her study found no association between PCB exposure and deaths from cancer or any other disease. Regular readers of this column are aware that rodents—especially the pristine lab varieties—are far more susceptible to cancer from chemicals than are humans.

Inasmuch as only one relevant paper was published between the 1999 and 2000 ATSDR findings, and that paper absolutely supported the 1999 findings, what changed? The short answer is that the fix was in, as specific concepts like “the weight of evidence” were now replaced with “some evidence” and “meaningful evidence.”

A much more detailed answer is to be found in a bravura paper entitled “Potential Human Cancer Risks from Exposure to PCBs: A Tale of Two Evaluations,” which appeared in the September-October 2003 issue of Critical Reviews in Toxicology. This work examined all relevant epidemiological data on PCBs using the latest EPA guidelines, and found that there is no causal relationship between PCB exposure and any form of cancer.

The paper’s final paragraph is rather ominous:

Clearly, the reasons for the substantial changes in the conclusions concerning the human carcinogenicity of PCBs from ATSDR (1999) to ATSDR (2000) are unknown. However, it does seem appropriate to suggest that unbiased evaluations, even of controversial issues such as the potential human carcinogenicity of PCBs, be conducted in a transparent manner following applicable guidelines. The dramatic differences between the conclusions of ATSDR (1999) and ATSDR (2000) is not consistent with this process.

Sources close to ultimately fruitless discussions between ATSDR officials and its critics, that occurred in the wake of this article, tell me of one particular exchange in which the the ATSDR 2000 findings were unequivocally skewered. The ATSDR scientist replied, “But, what about the rats?”

What about the rats, indeed.