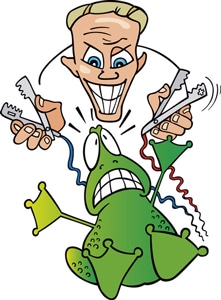 Those of us, of a certain age, remember the post-World War II promise of Science. Splitting the atom would bring us virtually unlimited cheap electrical power; antibiotics and vaccine technology (a la Salk/Sabin) would eliminate the scourge of infectious disease; and elucidation of the structure of DNA would lead to a cancer cure.

But 60-odd years later, we have radioactive waste; terrifying antibiotic resistant pathogens; and despite spending hundreds of billions of dollars on cancer research and mapping the human genome, are no closer to that elusive cure. As to DNA, its greatest contribution has been to forensic science, which no one predicted.

This being April, and Autism Awareness month, let’s get further aware. Last week’s piece suggested that today’s “autism” bears little resemblance to the condition described by Leo Kanner, and is most likely a neuro-immune disease, which can be cured in many cases. How revelatory that “incurable” is one of the few precepts that the Autism Mandarins retain from Kanner.

Which brings us to the definition of “junk science,” courtesy of junkscience.com: Faulty scientific data and analysis used to advance special interests and hidden agendas.

In the case of autism, desperate parents seek out expensive and dangerous therapies such as chelation, embark on bizarre diets, and worst of all—despite mountains of evidence to the contrary—avoid childhood vaccinations. Moreover, in some circles, the anti-vax ghouls have achieved a sort of heroic status, presumably because they have had the “courage” to fight Big Pharma and the medical establishment.

Ah, yes. “Grain of truth,” that essential component of all junk science. In this case, anti-vaxers can invoke the celebrated misdeeds of their opponents, even if unrelated to the matter at hand. This strategy applies especially well to the promotion of chemophobia, the most prized weapon in junk science.

The jury is out on what really started chemophobia. Certainly, an excellent candidate is Rachel Carson’s execrable Silent Spring, published in 1962. Untold thousands of poor Africans succumbed to malaria, because of her grotesque and mendacious vilification of DDT. How ironic that this pitiful spinster, dying of breast cancer, had to find “something” to blame it on, and what better than pesticides? Remind you of autism parents?

And if St. Rachel’s work weren’t enough, there’s always napalm and Agent Orange, both of which date back much earlier than the Vietnam War. For what it’s worth, napalm was developed by a Harvard chemist, Louis Fieser, whose storied career had its share of misadventures. That was well before academia became a haven for career chemophobes, led by Frederick vom Saal, Shanna Swan, John McLachlan, and Louis Guillette.

Despite its widespread use for more than 50 years, with absolutely no documented health effects on humans, and thousands of research papers attesting to its safety, the essential chemical Bisphenol A (BPA) has created a cottage industry—especially for vom Saal. Notably, vom Saal is prone to inflammatory BPA-themed public statements, warning about the dire effects of touching cash register receipts; and comparing infant formula in plastic baby bottles to dosing the child with birth control pills.

How’s this for a Yogi Berra or Sam Goldwyn inspired malapropism, only vom Saal was not kidding: When asked in a TV interview in September 2010 about BPA alternatives, he said there is no way to know how much safer the alternatives will be, because they haven’t faced nearly the same amount of scrutiny as BPA. D’oh!

Pre-OSHA era issues with chemical sterilant ethylene oxide (EtO), have led to much safer EtO sterilizers. Yet, this chemical, also, has been unfairly slandered, resulting in its ill-advised removal from many healthcare facilities. Quite sadly, EtO’s loss in popularity and availability for proper sterilization is directly related to the current outbreaks of superbug Carbapenem-resistant Enterobacteriaceae (CRE). Shades of DDT/malaria?

Finally, here’s my theory on why forensic use of DNA caught everyone by surprise. At first blush, the notion of a unique identifier for every person would be a no-brainer. However, such an application of DNA science is eminently practical, and such considerations are pretty much anathema in academic science. As if to underscore this point, polymerase chain reaction (PCR), the technique that turbocharged forensic DNA, was perfected by maverick—and decidedly non-academic—biochemist Kary Mullis.

After receiving his 1993 Nobel Prize (for PCR), Mullis was quoted in an interview in Esquire: “Science is being practiced by people who are dependent on being paid for what they are going to find out, not for what they actually produce.”

So that’s where the junk science is coming from.