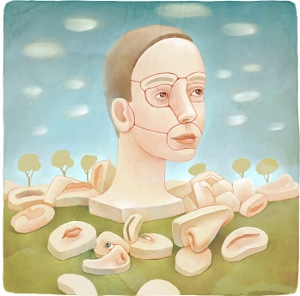 Plastic surgery can be defined as the functional, structural, and aesthetic restoration of all manner of defects and deformities of the human body. The use of the adjective “plastic” is derived from the Greek word plastikos, signifying “to mold” or “to form.” This particular mode of healing is quite ancient, with Sanskrit texts dating back to 600 BC and even earlier, describing reconstructive surgery of the nose, using tissue obtained from the patient’s cheek.

As old as plastic surgery might be, the term itself dates back only to 1818, and was coined by famed German surgeon Karl Ferdinand von Gräfe. In his work Rhinoplastik, Gräfe was documenting—you guessed it—reconstructive surgery of the nose. That he was a superintendent of German military hospitals during the Napoleonic Wars no doubt gave him many opportunities to refine his art.

Indeed, as the American Society of Plastic Surgeons puts it:

For better or worse, the driving force behind most plastic surgery developments during the late 1800s and early 1900s was war, with the awful injuries it often inflicts on its participants.

Never before had physicians been required to treat so many and such extensive facial and head injuries. Shattered jaws, blown-off noses and lips and gaping skull wounds caused by modern weapons required innovative restorative procedures. Some of the best medical talent in Britain, France, Germany, Russia and Austria-Hungary devoted themselves to restoring the faces and lives of their countrymen during and after World War I.

Aesthetic surgical procedures also developed during this period as physicians realized, in the words of 19th Century American plastic surgeon John Orlando Roe, “How much valuable talent (had) been…buried from human eyes, lost to the world and society by reason of embarrassment…caused by the conscious, or in some cases, unconscious influence of some physical infirmity or deformity or unsightly blemish.”

One such physical deformity is microtia, meaning simply “abnormal smallness of the external ear.” The condition can present in a range of severity–from a small but otherwise normal appearing ear, to one that has no ear canal and only a small amount of skin and cartilage. It may be bi-lateral, but is far more common on one side only, frequently the right. Not terribly common–occurring once in every in 7- 10,000 live births–microtia is often associated with some degree of hearing loss, as well.

There are two principal surgical approaches employed in correcting microtia: The Rib Graft and Medpor® techniques. Nowadays, these surgeries are typically performed on children.

In Rib Graft, cartilage from several ribs is removed through an incision on the patient’s chest. The cartilage is then carefully formed into an ear framework, and placed under the scalp. Subsequent surgeries are required to complete the reconstruction. Notwithstanding the pain involved with cartilage removal, such surgery must wait until the child has sufficient cartilage available, usually no earlier than age six.

Medpor® implants are biocompatible, porous polyethylene devices for craniofacial reconstruction and augmentation. The interconnecting, omni-directional pore structure allows for fibrovascular in-growth and integration of the patient’s tissue. The implants become the ear framework in this technique–originally developed in 1991 by Dr. John Reinisch.

Unlike Rib Cartilage, where the framework is placed under a tight skin envelope, the Medpor implant is placed on the top of the scalp. This allows the creation of an ear with an equivalent projection and symmetric appearance to the normal ear in one outpatient surgery.

The Medpor framework is covered with a very thin living tissue flap taken from beneath the scalp that completely wraps around the implant, allowing this tissue to integrate into the porous Medpor. Skin is then grafted on top of the flap. Medpor surgery can be performed on children as young as three years old, because it does not depend on the patient having sufficient rib cartilage.

In 2006, Los Angeles based plastic surgeon Dr. Sheryl Lewin refined the technique such that the flap is retrieved without requiring any incisions in the scalp. Trained originally as an architect, Lewin decided to combine art and medicine, and now devotes her career to ear reconstruction.

As if this weren’t enough, she recently formed Earicles – Miracles for Ears. Its mission is to help children born without ears thrive through education, research, advocacy and surgical care. The new organization will be sponsoring the 1st Annual Los Angeles Microtia Atresia Conference (LAMAC), August 9-11, at the Terranea Resort in Palos Verdes, CA.

Although the conference quickly sold out, LAMAC is partnering with Ear Community to host hundreds of additional families at the Ear Community Microtia Atresia Family Picnic.

Just when it need it most: A feel-good health care story!