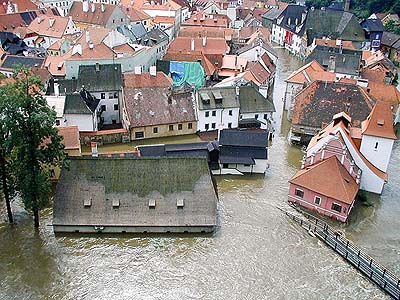 The incredible power of Hurricane Katrina, that has virtually destroyed the city of New Orleans, and wreaked havoc on much of the Gulf Coast, has brought with it an after tempest of extremist politics and junk science. Immediately after the storm hit Louisiana and Mississippi, and seemingly moments after news media reported live from the scene, some critics, including the ever-batty Robert F. Kennedy, Jr. and Arianna Huffington, began to blame the entire catastrophe on President Bush.

It is a demented environmentalism indeed that would attempt to transfer the responsibility for a natural disaster onto a mere mortal, even if he is the president of the United States. These ARE called Acts of God, after all, and they do have some predictability.

Portions of the East Coast and Gulf Coast—particularly Florida, Georgia, Alabama, Mississippi, Louisiana, and the Carolinas—are now in the midst of hurricane season. Insofar as weather patterns are predictable, the timeliness of hurricanes has no equal:  Every year, between June 1st and November 1st, we hear reports about impending storms and see all the subsequent imagery—the evacuation of families, shuttered windows, barricaded homes, intense rain, and a lone correspondent reporting from the scene.

By and large, people knew about Katrina’s impending force; but the actual destruction of New Orleans, which is more the result of poor city planning, and a criminally neglected system of levees, has nothing to do with global warming, or any other such nonsense. Let’s not forget that the city has an average elevation of six feet BELOW sea level. Consider the words of country blues legend, Memphis Minnie (1897-1973), updated in 1971 by Jimmy Page, Robert Plant, John Paul Jones, and John Bonham of Led Zeppelin:

Perhaps, the Feds and city fathers should have listened to this verse, taken from Memphis Minnie’s original 1929 recording:

And what about global warming, the alleged culprit behind this disaster? According to Dr. Stanley Goldenberg, a meteorologist at the Hurricane Research Division of the National Oceanic & Atmospheric Administration (NOAA):

“I speak for many hurricane climate researchers in saying that claims like that [about global warming] are nonsense. Katrina is part of a well-documented multidecadal-scale fluctuation in hurricane activity. This cycle was described in a heavily cited article printed in the journal Science, in July, 2001.”  [entitled “The Recent Increase in Atlantic Hurricane Activity: Causes and Implications”]

In fact, hurricanes were more consistently severe over sixty years ago, when the number and intensity of these storms created a legitimate sense of panic. Even the New York Times, hardly a supporter of President Bush or his environmental policies, agrees with this assessment:

“The severity of hurricane seasons changes with cycles of temperatures of several decades in the Atlantic Ocean. The recent onslaught ‘is very much natural,’ said William M. Gray, a professor of atmospheric science at Colorado State University who issues forecasts for the hurricane season.”

Like it or not, hurricanes are part of life in the Southeast. The real tragedy of Hurricane Katrina is not that it happened, though we all wish it had spared the Gulf Coast, but the woeful inability of local officials to deal with this mess. Given the history of New Orleans, and the flooding that occurred in the wake of Hurricane Betsy in 1965, this was inexcusable.

So, ignore allegations about global warning, and accept the truth—these storms are part of the seasonal cycle. Warmer water or freak weather patterns are not responsible here; bad civil planning is. The only thing that continues to get hotter is the rhetoric in defense of this puerile, politically-motivated junk science.