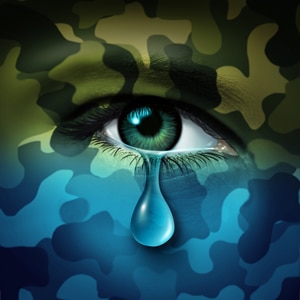 PTSD—as defined by noted University of Virginia psychology professor Robert E. Emery—is: “[An] emotional condition that sometimes follows a traumatic event, particularly an event that involves actual or threatened death or serious bodily injury to oneself or others and that creates intense feelings of fear, helplessness, or horror.”

Emery continues: “[S]ymptoms…include the re-experiencing of the trauma either through upsetting thoughts or memories or, in extreme cases, through a flashback in which the trauma is relived at full emotional intensity. It is normal to experience such reactions to some extent following trauma, and they are not considered symptoms of PTSD unless they last for at least one month or have a delayed onset.”

Long before organized wars ever existed, mankind has faced PTSD, although that term was not coined until 1980. As an article written for the National Center for PTSD puts it: “Attacks by saber tooth tigers or twenty-first century terrorists have likely led to similar psychological responses in survivors of such violence.” Several commentators invoke literary references, such as The Iliad…

Greek hero Achilles has been betrayed: King Agamemnon stole his consort, and his own men did little to defend their leader against this insult. He has witnessed untold slaughter, including the death of his closest friend Patroclus, which nearly drives him to suicide. At this point, the PTSD kicks in big time, as Achilles decides to enter the conflagration after his refusal to do so, and embarks on such a massacre of Trojans that the River Scamander becomes clogged with bodies, and overflows its banks.

If that weren’t enough, he finally does engage the Trojan champion Hector, easily defeats him, and desecrates his corpse, even threatening old King Priam, who begs to recover his son Hector’s body. Achilles does reclaim some humanity, turns over the body, and calls for a truce to allow for Hector’s funeral.

As noted, descriptions of post-battle psychological symptoms date back to antiquity, although organized medicine did not get much involved until the late 18th century. With 1952 came the first Diagnostic and Statistical Manual of Mental Disorders (DSM-I), and “gross stress reaction.” 1968’s DSM-II eliminated gross stress reaction, supposedly because of the relatively peaceful times, but 1980’s DSM-III added PTSD.

Presumably, by 1980, an avalanche of material had come out regarding Vietnam veterans, Holocaust survivors, and victims of sexual assault. DSM-5 (2013) not only eliminated the Roman numerals, but removed PTSD from anxiety disorders, and placed it into a new category: “Trauma- and Stressor-Related Disorders.” At about the same time, it was revealed that 4% of American men and 10% of American women will be diagnosed with PTSD in their lifetime.

However, there are plenty of PTSD sufferers who have not experienced much relief from conventional therapies. That’s why The Multidisciplinary Association for Psychedelic Studies, sponsored six Phase 2 studies treating a total of 130 PTSD patients, whereby MDMA (3,4-methylenedioxymethamphetamine) is being utilized. Phase 3 trials, including at least 230 patients, are also planned.

MDMA is better known as the illegal drug Ecstasy, and has been around since 1912, when it was developed as a parent compound to be used to synthesize other pharmaceuticals. In the late 1970s and early 1980s, MDMA was in limited use by psychiatrists, earning it the moniker “penicillin for the soul” because it seemed to enhance communication in patient sessions, and reportedly allowed users to achieve insights about their problems.

Alas, MDMA became a Schedule I controlled substance in 1985, making it extremely difficult for researchers to work with the compound. Of course, an “unintended consequence” of drug scheduling is to force people to obtain such medicinals as MDMA via underground sources. Thus, street Ecstasy (sometimes called “Molly”) is technically not equivalent to MDMA, in that the street drug usually contains additives such as cocaine, ketamine, methamphetamine, over-the-counter cough medicine, or synthetic cathinones (“bath salts”).

Pure MDMA has been proven sufficiently safe for human consumption when taken a small number of times in moderate doses, as in these clinical trials. Bear in mind that many of the fabled dire effects of street drugs are caused by additives and impurities.

Not surprisingly, drug prohibitionists are lamenting the FDA’s very limited relaxation of Schedule I, to permit such research. They say that this will eventually lead to legalization of these evil substances. Because, we all know how successful that War on Drugs has been. Meanwhile, cynics are concerned that Big Pharma will take up the MDMA banner, and slightly modify the compound to make it proprietary—on its way to big bucks treating PTSD for Veterans Affairs.

Maybe this time, though, the public won’t get fooled.