Prickly Pear And The Morning After

Prickly Pear And The Morning After 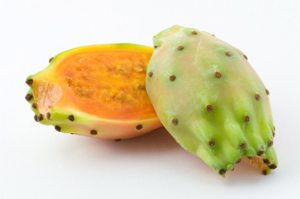 The term “prickly pear cactus” refers to any member of genus Optunia, flat-stemmed spiny cacti native to the Western Hemisphere. Of greatest interest, though is the so-called Indian fig cactus Opuntia ficus-indica. Archaeologists can document its use as human food going back 12,000 years, and some claim it was actively cultivated as early as 9,000 years ago.

The prickly pear itself—referred to as tunas in Spanish-speaking cultures—is the fruit of the plant, of which the spines and prickles are either scraped off or charred in a flame before eating.

The flattened stems, known as pads, can be eaten raw, or put into stews, or boiled and included in salads. The pads have also been used as livestock feed for hundreds of years, and famed botanist Luther Burbank developed a variety for this very purpose. Since the plant can grow to a height of 18 feet (5.5 m), it has been used as a living fence material.

The sap has been pressed into all sorts of applications, from an insect repellent to a cloth stiffener. Given its high content of sticky pectin, it has been used as an additive in mortars and plaster. Traditional medical applications for the sap include treating burns, wounds, and hyperglycemia.

In an August 2004 article published in the American Journal of Clinical Nutrition, supplementation with the fruit was shown to decrease oxidative stress. Specifically, consumption of the cactus pear fruit positively affected the body’s oxidation-reduction balance, decreased oxidative damage to lipids, and improved antioxidant status in healthy humans.

And then there’s the morning after. Veisalgia—the medical term for the alcohol hangover—has surely been known since the first person overindulged. This passage from the 1903 George Ade satire The Sultan of Sulu describes the symptoms…

Those dry Martinis did the work for me:
Last night at twelve I felt immense,
Today I feel like thirty cents.
My eyes are blurred, my coppers hot,
I’ll try to eat, but I cannot.
It is no time for mirth and laughter,
The cold, gray dawn of the morning after.

One recent study actually cataloged the prevalence of hangover symptoms, as a percentage of persons affected:

Beyond the personal discomfort, there are large economic consequences. In the United States, related absenteeism and poor job performance is said to cost $148 billion annually. Hangover may also be an independent risk factor for cardiac death.

Fortunately, there may be a way to mitigate the effects. In June 2004 (apparently a big year for prickly pear research), an article was published in the Archives of Internal Medicine entitled “Effect of Opuntia ficus indica on Symptoms of the Alcohol Hangover.”

The Tulane and UCSF based researchers concluded that…

The symptoms of the alcohol hangover are largely due to the activation of inflammation. An extract of the OFI plant has a moderate effect on reducing hangover symptoms, apparently by inhibiting the production of inflammatory mediators.

A novel method of getting your prickly pear extract before partying is offered by Denver-based Zaca, in the form of what the company calls a Recovery Topical Patch. The small patches are simply applied to the skin, and contain Prickly Pear, along with Milk Thistle, Thiamine (B1), Lipoic Acid, Vitamin B3, B5, and C; as well as Taurine, Lycopene, N-Acetyl-Cysteine, and Magnesium.

Zaca’s chief marketeer James Aleks told me that “zaca” is a Chumash Indian word meaning “peaceful.” The patches are popular, he says, because they eliminate the need for swallowing supplement pills. Many of his customers use them even if they’re not anticipating a night of drinking, noting that they just feel better. Perhaps this is due to the blocking of inflammatory mediators.

The authors of the Archives of Internal Medicine study anticipated criticism that decreasing hangover symptoms may indirectly foster increased use and abuse of alcohol. They point out that there is no evidence of this, and given the problems associated with hangover, its prevention is a worthy goal in itself.