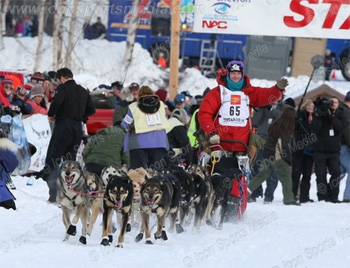 Many of us have heard of the Iditarod Trail Sled Dog Race that takes place every March, and runs 1150 miles (1851 km) from Anchorage to Nome, Alaska. The first race was in 1973, and was originally started to rekindle interest in the Iditarod Trail, once a major thoroughfare through Alaska.

Back in the day, during the long winter, the only way through the trail was via dog team. The Iditarod Trail began as a mail and supply route from the coastal towns of Seward and Knik to the interior mining camps at Flat, Ophir, Ruby, and beyond to the west coast communities of Unalakleet, Elim, Golovin, White Mountain, and Nome. As they say: Mail and supplies went in. Gold came out. Heroes were made, legends were born.

For example, in 1925, when Nome was hit with a diphtheria epidemic, life-saving serum was brought in by heroic mushers and their incredible dogs. But with the advent of air travel, and more recently with the proliferation of snowmobiles in Alaska, dog teams all but disappeared as a mode of practical transportation. Thus, the race brings everyone a taste of Alaska’s not-too-distant past.

Veterinarian and PhD physiologist Michael Davis—of Oklahoma State University’s Center for Veterinary Health Sciences—has long been interested in just how racing sled dogs can cover the distance in as few as nine days, to say nothing of braving blizzard conditions, temperatures that can dip down to -40° F (-40° C), and winds that can hit 60 mph (97 km/h).

While all the mysteries are far from being worked out, Dr. Davis recently presented his research results at the American Physiological Society’s conference—The Integrative Biology of Exercise V. Davis’ presentation was entitled “Metabolic Strategies for Sustained Endurance Exercise: Lessons from the Iditarod.”

Some of his more important findings fall under these three categories…

Davis rates the dogs’ ability to rapidly adapt to sustained strenuous exercise as their most striking trait. Initially, they fare no better than human endurance athletes, and show all the typical signs of depletion of muscle energy reserves, increases in stress hormones, evidence of cellular injury, and oxidative stress. However, within four days under conditions of continuous exertion, the metabolic profile of the dogs returns to pre-race conditions. No human athlete can begin to match this.

Aerobic capacity refers to the maximum amount of oxygen that an individual can utilize during intense or maximal exercise. It is expressed as VO2 max, measured as milliliters of oxygen used in one minute per kilogram of body weight.

Among the highest VO2 max results (90 ml/kg/min) was that of a cross country skier. Lance Armstrong’s VO2 max was said to be 85 ml/kg/min.

Compare those to an untrained sled dog (175 ml/kg/min), and a fully conditioned racing sled dog (300 ml/kg/min).

Then there’s the matter of diet. Under race conditions, the dogs can burn up to 12,000 calories (50,208 kJ) per day. Davis likens this to a 55-pound (24.9 kg) dog consuming 24 McDonald’s Big Macs to fuel their run on any given day. As it happens, a portion of their high-fat diet is converted to energy in the liver, and used as fuel in the initial stages of exercise. Davis notes that this would compare to humans consuming 72 Big Macs in a day, and even if we could accomplish this, it is doubtful that all the resulting fat could be processed the way the dogs do it.

If you want specific mechanisms to explain these findings, that is still under study. Davis thinks that they might involve the regulation of extremely thin membranes in the muscle fibers and cellular-level changes in the area of energy production.

Davis is clearly impressed by his subjects. “These are one-of-a-kind athletes,” he said. “What we learn from them will undoubtedly tell us a lot about human performance as well.”