Do The Right Green Thing

Do The Right Green Thing 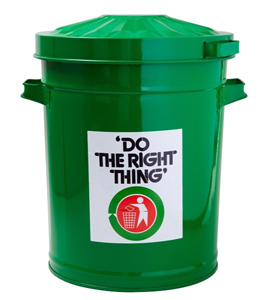 In Spike Lee’s breakout feature Do The Right Thing (1989), what particular action constitutes the “right thing” is far from clear. While a number of situations present themselves throughout the movie, in which the right or wrong thing could be chosen, the most important and pivotal choice occurs after a confrontation between Sal, a white pizzeria owner, and three black patrons of his restaurant.

As the fight escalates, one of the black patrons is tragically killed by police, and the gathering crowd focuses its hostility on Sal and his two sons. Mookie (played by Lee), a young black employee of Sal, throws a trash can through the window of the pizzeria, sparking a riot, which destroys the restaurant. Thus, the question arises: Was smashing the window the right thing because it directed the anger away from Sal and his sons, or was it the wrong thing since it destroyed Sal’s business?

For example, most Greens would like to see the use of fossil fuels drastically curtailed, citing issues with air pollution and solid waste. They will champion such technologies as solar, wind, hydroelectric, tidal, and geothermal power. In some cases, sympathetic politicians will arrange for massive government subsidies of these modalities, with—to be kind—mixed results.

Meanwhile, according to the Nuclear Energy Institute…

Nuclear power plants provided 13.5 percent of the world’s electricity production in 2010. In total, 13 countries relied on nuclear energy to supply at least one-quarter of their total electricity. As far as pollution reduction in the US, nuclear generated electricity avoided 613 million metric tons of carbon dioxide (2011), more than half a million tons of nitrogen oxide, and 1.4 million tons of sulfur dioxide.

This carbon dioxide reduction is nearly equivalent to all the CO2 produced by every passenger car in the country, and the nitrogen oxide reduction represents the amount that would be emitted by 28 million cars. Impressive figures, to be sure. Yet, one would be hard-pressed to find a self-respecting Green advocating nuclear energy. The incidents of Fukushima Daiichi, Three Mile Island, and Chernobyl weigh heavily on their minds, and often prevent a balanced view of the situation.

Another balancing act exists when we pit energy efficiency against indoor air quality. Many are well aware that sick building syndrome was a direct result of our zeal in sealing up our structures, as if saving energy were the ultimate Holy Grail. Yet, we still hear of “Green” awards being granted to new homes in which airborne concentrations of such compounds as formaldehyde exceed sensible levels.

And, we might ask, where are those chemophobes who would cry “No safe level exists for [fill in the blank]” in the wake of the current rollout of compact fluorescent lamps? Has reason finally triumphed when one considers the exceedingly small amount of mercury contained in a CFL, balanced against the energy savings and the longer service life?

In the inaugural issue of Ecology and Society (1997), an article appeared by Gordon L. Baskerville, then on the Faculty of Forestry, University of British Columbia. It is entitled “Advocacy, Science, Policy, and Life in the Real World.” The following excerpts are worth noting:

As a society, we seem to converge on pathological gridlock with respect to linking economics and ecology in decision making. Ecological evaluation too frequently assumes (usually unconsciously) that there are no costs to be borne in an “ecological” action/constraint. On the other hand, the purely economic approach to decision making assumes ecology away by merely maximizing net present value as measured in dollars, subject, when necessary, to constraint “for environmental protection.”

Ecological science seems to be tied up in describing what things look like, rather than in discovering how systems function. Problems in managing resource systems do not lie in what the systems look like, in general, but rather in how the system being managed functions. In a world where everyone who so chooses is an expert in ecology, the meaning of the word and, more importantly, the meaning of the science, seems tragically lost.

I would add that the notion of “Green” must go beyond regulatory and academic pursuits. In fact, it does, but such activities are often less well-publicized.

Last May, this column mentioned OdorNo, an Ohio-based manufacturer of biodegradable odor barrier plastic bags. Its founder Garett Fortune is also the founder and CEO of Commodigy, a Green trading enterprise. Commodigy was formed as a platform to trade excess recycled plastics. Now, the firm qualifies and secures large feed stocks of recycled materials for its clients and ensures that the sources are consistent and available ongoing for manufacturing of green products.

As Garett puts it..

Commodigy is the perfect example of an environmentally responsible business, a ‘greenBay (green + eBay),’ where the life cycle of products extends well beyond traditional means. This opportunity to buy and sell goods—discarded recyclables from area hospitals, for example—is a smart solution to an otherwise complex challenge: How to protect the environment and maximize use of any number of items. Commodigy offers a solution.

We really can, and we must, do the right Green thing.