How Safe are Petting Zoos?

How Safe Are Petting Zoos? 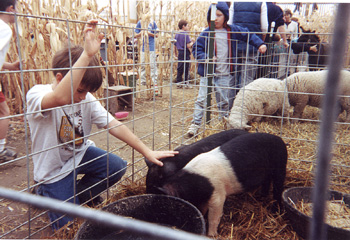 What could be more fun, particularly for children and families, than a visit to a local petting zoo? This weekend ritual, a virtual mainstay of summer, can also be an overlooked health hazard. Just what you needed, right? More bad news. Sad to say, poor regulation, abysmal sanitation standards, and infected animals can all combine to create a risk where many would least expect it.

In the past few years, alarming numbers of dangerous E. coli (Escherichia coli) strains have been found at petting zoos, with a concomitant spike in the number of deaths of children who contracted these bacteria. In Pennsylvania, legislators recently passed a bill requiring petting zoos and other animal exhibitions to provide hand-washing facilities, and to post information about the more than 75 diseases humans can get from contact with animals.

The problem is hardly confined to one region of the country. And, since many petting zoos lack the full-time personnel (including staff veterinarians, groundskeepers, and other trained animal care attendants) found at many big city parks and zoos, the odds are that more outbreaks will occur at these facilities.

Petting zoo infection control issues are not a new phenomenon, either. Indeed, various advocacy groups have warned about such problems for some time. In April 2001, the Centers for Disease Control and Prevention (CDC) issued a warning in its Morbidity and Mortality Weekly Report about the dangers of E. coli infection at petting zoos. The CDC’s guidelines called for more hand-washing facilities and a ban on hand-to-mouth contact when close to animals. Bear in mind that this report also detailed the cases of 56 people—most of them children—who had contracted E. coli from petting zoos on two farms over a period of a few months.

Unfortunately, the CDC’s recommendations have not lessened the risk posed by petting zoos. Illnesses associated with these places continue to develop all over the United States and Canada, with an outbreak of E. coli having infected 26 people (including 23 children) at a series of petting zoos and state fairs in Florida. In North Carolina, health officials reported 43 confirmed and 108 suspected cases of E. coli infection in people who had visited a petting zoo at the state fair. Also, Canadian authorities recently issued a warning after six children became ill with suspected E. coli infections, following visits to petting zoos in British Columbia.

There are numerous preventive measures that can be adopted…

1.    Visitors should be made aware that certain farm animals pose greater risk for transmitting infections to humans than others. This would include calves and other young ruminant animals, young poultry, and noticeably sick individuals of any species.

2.    Venues should take steps to minimize risk, with clear separation barriers constructed to prevent contact with animals most likely to be infected.

3.    Hand-washing stations should be available at both the animal-free area and the interaction area. Running water, soap, and disposable towels should be readily available so that visitors can wash their hands immediately after contact with the animals.

4.    Persons at high risk for serious infections should observe heightened precaution. This would include young children, the elderly, pregnant women, and immunocompromised individuals.

A trip to a petting zoo does not have to descend into illness and tragedy. If owners truly care about their business, and thus want repeat visitors, they will implement the suggestions listed above. The risks from irresponsibly managed petting zoos are simply too numerous to ignore. With bacterial infections on the rise, we need to prevent any future outbreaks. Let’s restore safety to these venues.