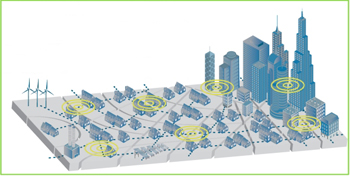 Promoters of the so-called Smart Grid like to remind us that our century-old power grid is the largest interconnected machine on Earth. It has become so much a part of our everyday existence that some commentators regard it as an ecosystem. As one brochure puts it, with a clever turn of phrase, “A smarter grid applies technologies, tools, and techniques available now to bring knowledge to power—knowledge capable of making the grid work far more efficiently.”

Given the vast scale of the grid, small improvements can bring significant benefits. It is noted that if the grid were merely five percent more efficient, the energy savings would equate to permanently eliminating the fuel and greenhouse gas emissions from 53 million cars. Likewise, if only one incandescent bulb were replaced in every American home with a compact fluorescent lamp, the country would conserve enough energy to light 3 million homes—not to mention producing a savings of more than $600 million each year.

Ideally, the Smart Grid would…

The latter precept will be driven by smart meters, replacing the old analog type units, now installed at virtually every business and residence.

A good smart meter would…

Deployment of smart meters began in earnest in 2000, with Italy now leading the way at over 27 million installations. Other countries are mostly in some form of a pilot deployment, with optimistic goals being set, and met in many cases.

In the US, however, the deployment process is much more difficult, given power industry regulation on a state-by-state basis, as well as questions being raised regarding privacy, efficacy, and even autocratic control of one’s life. Many people are uncomfortable with the notion of a power utility being able to pare down your power usage remotely, if they feel that you are using “too much.” This is far removed from rolling blackouts based on overall peak demand. And, perversely, the consumer would be paying extra for this feature.

While demand side management is controversial, few voices are heard complaining about broadband over power line (BPL). A goodly number of people in the US and other countries do not have reasonable access to true broadband Internet connectivity (defined as at least 1 megabit per second).

Clearly, BPL is green, since it is built completely on an existing infrastructure, with no cable runs or towers required. That being said, there are a number of technical challenges—derived from the fact that power lines are a noisy environment, with countless pops, clicks, and harmonics being produced. Additionally, the data transmission itself can interfere with amateur radio, aeronautical, military, and other communications.

Fortunately, these problems have largely been addressed, with BPL pilot programs underway in many countries.

One innovative company in this space is Gridline Communications, boasting successful projects in Africa, Latin America, Texas, Arizona, and New Mexico. CEO Terry Dillon speaks of his company’s new intellectual property that will have “disruptive impact” (in a good way) on BPL. Dillon is no stranger to this sort of disruption, having been involved with voice mail pioneer Boston Technology from the very beginning.

Dillon notes that only about 20 percent of rural customers stateside have access to broadband, so partnering with the more than 900 rural electrical cooperatives in BPL is a natural fit. As it is, sending communications over power lines has been going on since the 1970s, and at one point, some power companies even tried their hands at being phone companies—with less than stellar results.

A much better model would have the utilities partnering with vendors such as Gridline, giving the power companies, as Dillon puts it, “incremental revenue with no cost.” Nice work if you can get it!

In fact, he sees the days coming when Internet service providers would not charge anything for connectivity per se. Rather, the revenue would come from content, web services, and applications (otherwise known as “the cloud”).

One thing’s for sure. Alexander Graham Bell, Thomas Edison, and even troubled genius and father of the power grid Nikola Tesla would be, uh, shocked at the merged horizons of power and communications.