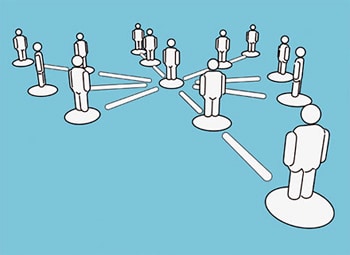 Although some young people might be surprised to hear this, social networks existed long before the Internet, and have been analyzed since the late 19th century. One of the most interest findings of social network analysis is the so-called small world phenomenon, also known as six degrees of separation. That is, on average, each person is separated from every other person by six intermediaries in a chain of contacts.

Pioneering work on this phenomenon was done by social psychologist Stanley Milgram in the late 1960s. Subjects were chosen at random in either Omaha, Nebraska or Wichita, Kansas, and were given a letter to be forwarded to a certain contact in Boston. (No postal address was provided, of course.)

On the rare chance that the subject actually knew the Boston contact, he was asked to forward the letter directly to that person. Otherwise, they were instructed to suggest a friend or relative they know personally, who would be more likely to know the Boston contact, and forward the letter to that individual. Records were kept by the researchers to track the progression of each letter to its target, and the average number of intermediaries was six.

In one iteration of the experiment, 16 of 24 letters reaching the target flowed through the same person—an early indicator of Malcolm Gladwell’s notion that the small world phenomenon is dependent on a few extraordinary people (“connectors”) with large networks of contacts and friends.

Now we find that network phenomena apply to smoking cessation. In an article published recently in the New England Journal of Medicine, researchers Nicholas Christakis and James Fowler examined a social network of 12,067 people, who were part of the Framingham Heart Study from 1971 to 2003. They concluded that:

As a simple example, consider a network containing three individual smokers—A, B, and C. A knows B and B knows C, but A and C do not know each other. Still, if C quits smoking, A’s chances of quitting go up 30 percent, whether or not B smokes. Christakis notes that B could act as a sort of carrier for the behavior change.

“If you look back at 1971, smokers and non-smokers alike were at the centers of social networks. For people running companies and having parties, smoking was irrelevant. But during the ’80s and ’90s we saw a dramatic shift of smokers to the periphery of the social network. Contrary to what we might have thought in high school, smoking has become a supremely bad strategy for getting popular.”

The authors suggest that network phenomena should be further exploited to spread positive health behaviors—going beyond their own data to cite the good success rates of peer support programs targeting smoking and alcohol.

Peer pressure has sure come a long way.