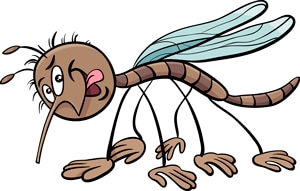 If it takes two or more victims for the perp to be considered a “serial killer,” what name would you give an animal responsible for the deaths of more than 1 million people every year? The short answer would be “mosquito.” The longer answer would be that these tiny flies (order Diptera; family Culicidae) themselves don’t do the killing. They are merely vectors for such baddies as…

Fortunately, there have been organized efforts to combat mosquitoes since the early 1900s. Indeed, in the aftermath of the 1905 Yellow Fever outbreaks in New Orleans and Pensacola, FL, it was conclusively demonstrated that mosquito control could eliminate this disease. Other milestones in American mosquito control include:

“Over the last few years, the U.S. has had increased cases of mosquito-borne illnesses such as the West Nile Virus. Furthermore, other exotic diseases such as Zika Virus, dengue fever, and Chikungunya threaten our shores. To ensure the safety of family, friends, and pets, it’s extremely important to make sure you’re taking the proper steps: first, reducing mosquito breeding through water management and source reduction, and second, reducing adult mosquito populations.”

“Eliminating standing water is probably the most important thing to remember when preventing or controlling mosquito problems. Remember to irrigate lawns and gardens carefully to prevent water from standing for several days,” added Conlon.

While most people think of California as a relatively arid location, the state is by no means free of mosquitoes, and its activities in this connection date back to the beginning of the 20th century. Early efforts in the state operated via subscription and donation. It was in 1915 that Governor (and later long-term US senator) Hiram Johnson signed the Mosquito Abatement Act, which provided for the formation, organization, and financing of mosquito abatement districts.

At present, the Mosquito and Vector Control Association of California comprises 64 member agencies, set up in five regions. Let’s take a brief look at one of those member agencies—the Compton Creek Mosquito Abatement District (Compton, CA).

Compton Creek’s founding dates way back to 1927, related to a devastating flood. Among its many outreach efforts, the agency offers a free program for students in 7th grade Life-Sciences classes. As you might expect, it focuses on mosquitoes—detailing anatomy, life cycle, habitat, food sources, disease transmission, and the role that students can play in helping to protect their communities from mosquito-borne diseases. In addition, its active Twitter feed keeps those in its district up-to-date.

I’ll give the last word to Micah Ali, President of the Compton Creek Mosquito Abatement District:

“We are at the forefront of educating citizens, schools, individuals, and families about ways to guard against the risk of mosquito-borne illnesses like West Nile Virus and Zika, among other public health emergencies. Our work throughout the City of Compton and the County of Los Angeles is a model other cities and states should adopt, because we have an established record of—we have a proactive reputation for—saving lives through a combination of intelligence, planning, coordination, and action.”