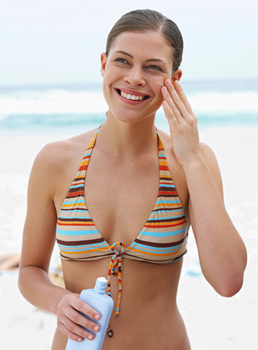 Here in the northern hemisphere, summer is officially upon us. As Mother Earth counts down the days between the Summer Solstice and Autumnal Equinox, we prepare ourselves for hot weather, vacations, balmy evenings, and the inevitable depressing and alarmist “Sunscreen Investigation” from the Environmental Working Group (EWG).

Many readers will remember fear entrepreneur extraordinaire EWG as the power behind the absurd and thoroughly discredited Alar scare of 1989. Other dubious achievements of EWG include an extremely misleading campaign against water fluoridation, attacked by the CDC; and a way overblown lead in lipstick scare, which deftly ignored that the average amount of lead the average woman would be exposed to when using cosmetics is 1,000 times less than the amount she would get from eating, breathing, and drinking water that meets EPA standards.

Here is some reaction to last year’s EWG Sunscreen Report—from beleaguered dermatologists, who were having a difficult enough time getting their patients to use sunscreen in the first place:

“Patients are confused,” said Dr. Darrell S. Rigel, a clinical professor of dermatology at New York University who is a skin cancer researcher. “I’ve had patients come in and ask, ‘Am I harming myself by using it?’ I’ve spent a lot of time talking to people about it.”

“What they are doing is developing their own system for evaluating things,” said Dr. Warwick L. Morison, professor of dermatology at Johns Hopkins and chairman of the Skin Cancer Foundation’s photobiology committee, which tests sunscreens for safety and effectiveness. “Using this scale to say a sunscreen offers good protection or bad protection is junk science.”

The 2008 edition raised fears about the chemical oxybenzone, used in many sunscreens because it absorbs UVB and short-wave UVA (ultraviolet) rays. EWG capitalized on a CDC study that found this compound in 97 percent of urine samples taken from cohort of 2,517 individuals.

This was hardly a surprising finding since oxybenzone is used in a wide variety of cosmetic and personal care products as well as in food packaging. Moreover, the compound is approved for use by the FDA as well as by regulatory agencies in Europe, Canada, and many other countries.

Undaunted, EWG pointed to a study originating from Mount Sinai School of Medicine, ground zero of sometimes dicey research on endocrine disruptors. This paper posited that oxybenzone promoted a decrease in birth weight among girls and greater birth weight in boys—a paradoxical finding to be sure. Predictably, only the lower birth weight finding was touted by EWG, and reported in the mainstream media.

This work, and others like it from Mount Sinai, often involves a single urine sample taken from a cohort of pregnant women (in this case 404 women), analysis for some evil chemical, and statistical machinations in an attempt to draw some finding. In this particular research, the urine samples were taken at different stages of the pregnancies.

It is noted that in studies of this type there are some significant confounding factors, including smoking and alcohol and drug use (legal or otherwise) during pregnancy. Such data is presumably obtained by questionnaire, although as is typical with research from this institution, the questionnaire is not included in the publication. On a previous occasion, I asked one of the authors why readily available clinical lab tests were not used to check for these factors, and was assured that the statistical magic could correct for any less-than-truthful questionnaire replies.

The birth weight effect is by no means remarkable, and is well within normally observed variations, although the authors would claim that this, too, can be tweaked with statistics.

The 2009 edition of EWG’s Sunscreen Investigation does not disappoint. The fears over oxybenzone are stoked again, even as EWG takes unwarranted credit for the fact that the use of this compound is down 19% compared to last year. A more likely explanation is that in the ultra-competitive and relatively low margin world of sunscreens, products are being reformulated constantly, to gain an edge.

Furthermore, using their own methods, which are disputed by many as well as being poorly documented, EWG casts aspersions on the stability of certain sunscreens and their reported SPF and UVA values.

However, let’s not miss the big picture. EWG’s sunscreen exercise is but one in a series of scare-mongering anti-chemical ploys, to generate more donations. Their own report essentially agrees…

Sunscreens are the tip of the iceberg when it comes to ways that the chemical industry and the government are failing to protect public health. An extensive body of scientific literature demonstrates that everyone in the world carries in their body hundreds if not thousands of industrial chemicals at any given moment, the result of exposures to contaminants in air, water, and food, and to ingredients in everyday consumer products.

Ironically, EWG’s recommendations call for a series of FDA standards to be developed, while they routinely trash existing FDA standards in many other areas.

Leave it to Dr. Andrew Weil to put some perspective on the issue:

“I see the threat of skin cancer as far higher than any theoretical risk posed by the chemicals sunscreen contains. Skin cancer is increasing at an alarming rate due to the cumulative effects of sunburns and sun tanning, which is also a sign of skin damage. Choose whatever form of sun protection you prefer, but definitely keep something between your skin and the sun.”

To which I would add:  Keep something between yourself and overblown environmental scare campaigns.