Teixobactin To The Rescue 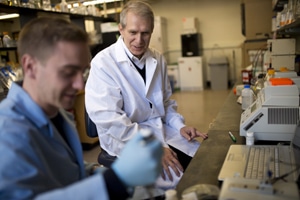 Teixobactin To The Rescue

Ebola was scary enough, but now we hear about multiple deaths related to outbreaks of superbug bacteria known as carbapenem-resistant Enterobacteriaceae, popularly called “CRE.” This family of bacteria includes human gut dwellers Klebsiella and our old friend Escherichia coli. During the past 15 years, strains of these bugs have become resistant to a class of “last resort” antibiotics called carbapenems, and as such are extremely difficult to treat. Mortality rates of 50% have been reported for CRE infections.

Infection control guru Lawrence Muscarella has been covering CRE, and notes that these infections (so far only occurring in hospitals) have been on the increase. Better known to the public are superbugs MRSA (Methicillin-resistant Staphylococcus aureus) and drug-resistant tuberculosis.

As such, an article just published in Nature, entitled “A new antibiotic kills pathogens without detectable resistance” has been greeted with much enthusiasm and prominent coverage in the news media. The researchers—led by Northeastern University Distinguished Professor Kim Lewis—call their new class of antibiotic teixobactin. According to Lewis, this marks the first discovery of an antibiotic to which resistance by mutations of pathogens has not been identified.

He continues: “The screening of soil microorganisms has produced most antibiotics, but only one percent of them will grow in the lab, and this limited resource was over­mined in the 1960s.” What about the rest of this 99 percent uncultured bacteria? Lewis, along with co-author Slava Epstein, also of Northeastern, came up with what they call an “Isolation chip,” or ichip, expressly designed to facilitate high-throughput microbial cultivation in situ.

The ichip is an offshoot of microfluidics methods previously developed for microbial storage and screening. The device consists of hundreds of miniature diffusion chambers, each loaded with a single bacterial cell, producing monspecific cultures. Diffusion of nutrients and growth factors through the chambers enables growth of uncultured bacteria in their natural environment. Once a colony is produced, a substantial number of uncultured isolates are able to grow in vitro.

The researchers screened extracts from 10,000 of these isolates for antimicrobial activity, using plates overlaid with Staphylococcus aureus. One extract from a new species of betaproteobacteria they named Eleftheria terrae showed excellent results. They dubbed the active molecule teixobactin. According to the Nature paper, the researchers were unable to obtain mutants of S. aureus or Mycobacterium tuberculosis resistant to teixobactin, even when a low dose of the compound was used.

Ironically, the proteobacteria phylum of bacteria contains all sorts of baddies, including the genera Escherichia, Salmonella, Vibrio, and Helicobacter. But then, we are also making good things from Clostridium botulinum…Botox. Speaking of Clostridium, teixobactin performed quite well against Clostridium difficile and Bacillus anthracis (anthrax).

The researchers are hopeful regarding the non-resistance finding: “Our impression is that nature produced a compound that evolved to be free of resistance,” Lewis said. “This challenges the dogma that we’ve operated under that bacteria will always develop resistance. Well, maybe not in this case.” More than that, initial in vivo results, using mice (good predictors of humans) are promising, as well.

So, what’s not to like? Teixobactin does not seem to be effective against gram-negative bacteria. Gram staining, developed in 1884 by Hans Christian Gram uses a crystal-violet stain to assist in viewing the bugs under a microscope. A smear of these cells on a slide is treated, and those species that retain the color are called gram-positive, while those that don’t are gram-negative.

Arguably, there are more nasty pathogens in the gram-negative camp; but, who’s to say that the ichip method won’t also produce a dandy gram-neg killer?

We should balance all this sweetness and light with a dose of reality. The CRE outbreaks mentioned earlier were not handled at all properly, and in at least one case were covered up. Hospitals should clean up their acts with the same zeal that Lewis et al. approach their drug discovery.