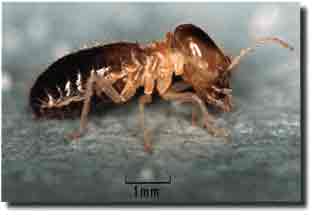 The arrival of spring means warmer weather and picture-perfect days, along with a problem that is costly, persistent, and dangerous–termites. If left unchecked, these pests can devastate a home, and although most damage can be repaired, such work is usually extremely expensive, easily overshadowing the cost of taking care of the problem in the first place.

While many of my previous articles have focused on the hazards of various toxic gases, that might be encountered at home or in non-industrial workplaces, controlling household pests represents a beneficial use of toxic compounds. Indeed, learning how to use and control potentially deadly substances, such as chlorine for water purification, gasoline for fuel, and pesticides of all descriptions, for the betterment of mankind, is an important aspect of scientific progress.

Now, let’s meet our little foes. Termites form the order Isoptera, a subdivision of the Insects. The majority of these creatures have the ability to digest cellulose, owing to the presence, in a mutualistic relationship, of protozoans in their hindgut. The essential digestive enzyme, then, is actually secreted by their microscopic boarders. Entomologists can count up over 1,900 species of termites, and merely ten percent of this number have been identified as pests. Indeed, most termites live in tropical rain forests, far from any man-made structure, performing a necessary scavenger function. Termites have a highly developed caste system, with workers, soldiers, and queens.

Of the species that do present a problem to humans, effective control measures must be based on whether the enemy is a subterranean or a wood-dwelling species (usually a drywood termite), as treatment methods differ.

Drywood termites (Kalotermitidae family), mostly limited to warmer climates, are named for their ability to survive with much less water than other species. They tend to live in small colonies, that are contained entirely within the timber being consumed.

The classic sign of a drywood termite infestation is the presence of hard, dry fecal pellets that resemble sawdust. Only, you know that it ISN’T sawdust. Now what?

Spot-treatment is cheaper, and will work to the extent that the inspector has identified all the colonies, assuming that these colonies are accessible. Borates and other chemicals have been used in this procedure, that may often require the drilling of small holes, and injection of the pesticide. Another method of spot-treatment utilizes liquid nitrogen, whereby the infested wood is cooled to -20° F, for several minutes. Many times, though, spot-treatment does not solve the problem, and whole-house fumigation becomes the next step.

In years past, methyl bromide was the biggest factor in whole-house fumigation. The chemical was relatively inexpensive, and was highly effective. A problem was that it reacts with certain rubber materials, leaving a permanent sulfur odor. Skilled applicators would advise the homeowner to remove potentially affected items from the dwelling, but occasionally, even carpet padding would react, with unpleasant consequences. A bigger problem for bromide was its identification (some say without justification) as an ozone depleting substance. Given these failings, methyl bromide has all but disappeared from the residential fumigation scene.

Taking its place, and offering competition when bromide was still popular, is sulfuryl fluoride, known by its trade name–Vikane®, a product of Dow AgroSciences. This fumigant is highly effective, boasting less than a 1% failure rate, leaves no residue, does not react with most materials, and quickly dissipates from the structure into the atmosphere.

Safety procedures include securely closing the structure, posting warning signs, and the introduction of chloropicrin, a tear gas-like compound, as a warning agent, since Vikane® has no odor. Before the structure can be reentered, a sensitive instrument, such as those manufactured by Interscan, is used to assure that the Vikane® has completely dissipated.

Subterranean termites (Rhinotermitidae family) are far more widespread than their drywood cousins, and nest in the ground or the base of trees, maintaining long tunnels to the surface–and your house. It is the presence of these so-called mud tunnels that will indicate a subterranean infestation. Other signs are swarms of the insects; hollow-sounding walls, baseboards, and floors; and piles of dead termites! Colony size can number in the tens of millions, thousands of times larger than a typical drywood cohort.

Treatment methods include “trench and treat” techniques that employ various liquid insecticides, close to the structure, and systems such as BASF’s Subterfuge® and Dow AgroSciences’ Sentricon®. These systems involve a two-step process whereby key remote points are monitored for termite activity, followed by then replacing the monitoring devices (cellulose objects) with an insecticide bait. The busy termites carry the poison back to the colony, eventually killing all the inhabitants.

In the hands of trained, authorized applicators, and given the rigorous regulatory burdens that must be met by the chemical manufacturers, the consumer can be confident in the safety and effectiveness of modern techniques to fight these tiny home invaders.