Some Thoughts On The Hydrogen Economy

Some Thoughts On The Hydrogen Economy 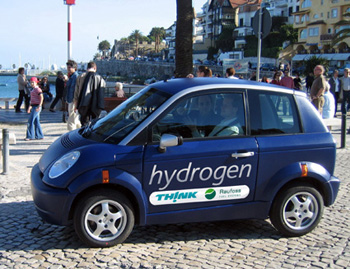 With gasoline prices on the rise, a weak dollar, and unrest in the Middle East—as if any of this were novel—we are again hearing about the hydrogen economy. You may remember GM’s HydroGen3, a widely touted hydrogen-powered minivan, and the Ford Focus FCV.

Hydrogen power for vehicles has always been captivating, for these reasons:

As you might imagine, though, there is more to the story…

Abundant though it may be, hydrogen is generally not present as H2. Rather, it has to be produced by the electrolysis of water, or by reforming fossil fuels. Either way, energy is required. Reforming seems to be a non-starter, since it generates carbon dioxide, and most often uses natural gas, an already clean fuel.

Electrolysis has the big advantage that it can be done anywhere, so that your home tap water really could be converted to hydrogen to fill up your car. Of course, lots of electrical energy is required to accomplish this. Indeed, it takes about 10% more energy to electrolytically separate hydrogen from oxygen than one would recover from combusting the hydrogen.

Some estimates claim that electricity production must double to drive the hydrogen economy, so where would that come from? Since we are supposedly trying to get away from fossil fuels, we are left with nuclear, hydro, biomass (wood, waste, and alcohol), solar, and “other renewables.”

Biomass, while renewable, will still generate nasty carbon dioxide. Wind power, being pollution-free—at least in generating electricity—is often touted as the answer here, but is not without issues. For one thing, wind farms are typically located in remote areas, and either the hydrogen or electricity would have to be transported, with a net loss in efficiency. For another, it would be enormously expensive to build out sufficient wind energy capacity, and many of these proposed plants would probably fail environmental impact studies!

In the electrochemical approach, one electrode of the electrolyzer is replaced with a photovoltaic semiconductor material to generate the electricity needed for the water-splitting reaction. Thus, there is a gain in efficiency since the electricity is generated on the fly, and no separate solar cell is required. This sounds great, but research is ongoing to find photovoltaics that are both robust enough to drive the reaction, and will maintain stability in a liquid environment.

In the biological approach, it is noted that certain species of algae and bacteria will photosynthesize hydrogen instead of sugar and oxygen. However, the hydrogen synthesis is inhibited by oxygen, so bioengineering of an enzyme or a whole new organism would be required to make this even marginally practical.

What about hydro? Hydro is wonderful, but how many more dams would be needed to dramatically increase electrical production, and at what cost in time, materials, and energy? Ironically, nukes appear to be the best road to the hydrogen economy at the moment.

Assuming we can get the hydrogen, the next problem is storing it, unless we move to a strict model of everyone generating his own on the fly. Hydrogen is notoriously explosive, reactive, and tends to leak from most containments, presenting a safety hazard as well as a simple net loss of fuel.

If you have the hydrogen, and have figured out how to store it, now you need the vehicles. Unfortunately, this becomes a chicken/egg scenario.

Absent a massive intervention by the Feds, one doubts that auto manufacturers would be producing hydrogen cars without an infrastructure in place. Moreover, at upwards of $5,000 per car, it would not be feasible (again without subsidies) to convert most vehicles to run on hydrogen. Instead, hydrogen-only models would have to be phased in.

Finally, it must be said that the incredible amount of electricity required to drive this hydrogen economy would be far better utilized to power transportation directly, as in electrically-powered light rail systems, or electric passenger cars.

As to the reliability of the sun, its energy is produced by fusion, and that remains the elusive butterfly. If you want to dream about alternative energy, dream rather of fusion. Some of the greatest minds in the world have labored over it, as yet to no avail.