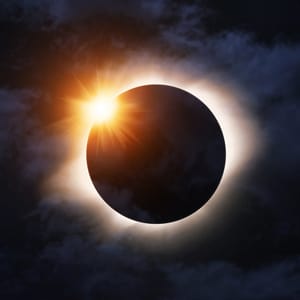 We’ve been hearing about the great National Eclipse for months, and on August 21st it will finally arrive! In this article, we point out some interesting facts about this eclipse, and look at a few eclipse-related health scares you may have missed.

To begin, this 2017 event truly is a national eclipse, because it is the first one since June 8, 1918 that traverses the continental United States, from coast to coast. In the 1918 event, US territory was the primary viewing point worldwide, although certain Caribbean and Pacific islands were in the path of totality. Our upcoming eclipse is positively unique in that the United States is the only country in the path of totality this time. In fact, this is the first time in the history of the US that we have been so favored. The last time totality was limited to our territory was for the eclipse of June 13, 1257.

Those of a certain age will remember that the last time a total solar eclipse hit our shores was on February 26, 1979, but the path of totality was limited to portions of Washington, Oregon, Idaho, Montana, and North Dakota. I observed this one in Los Angeles, and even at 77% sun coverage, it was impressive. But, totality is something else. Many describe it as a life-changing event. Here is a wonderful narrative of what you will see.

As to health effects—real and imagined—a very real one is eye damage from looking directly at anything other than totality, without proper eye protection. So, we present some safety tips.

Let’s look at some eclipse-related health myths, culled from NASA and other sources.

1.Pregnant women should not watch an eclipse. This one is based on irrational fear of radiation, and the supposed enhancement of such effects during an eclipse. After all, the sun is a giant fusion reactor, spewing trillions of neutrinos, or something.

2.Don’t prepare food during an eclipse, it will be poisoned. This, also, is derived from fear of solar radiation. Of course, tainted food could have been prepared for your eclipse party, and is far more likely to be related to poor food safety practices than radiation.

3.Solar eclipses six months after your birthday, or on your birthday, are a sign of impending bad health. This could be a holdover from overzealous interpretation of astrological tables, and is surely a result of confirmation bias.

4.A partial solar eclipse on September 26, 1345 presaged the Black Death of medieval Europe. European astrologer Geoffrey of Meaux observed this eclipse, claiming that it lasted 3 hours, 29 minutes, and 54 seconds. From this, he somehow deduced that a plague would occur, and would last three years. Most authorities date the plague from 1347-1351, and trace its origin to China, as it spread via trade routes. The death toll is estimated at 25 million. No explanation has been given as to why this eclipse foreshadowed a plague, nor why a total eclipse on August 7, 1347 was of no similar predictive importance.

We close with a bizarre, but demonstrably true effect of solar eclipses: the Allais Gravitational Anomaly, or simply the Allais Effect, named after Nobel Laureate (in economics) Maurice Allais, who first observed it in 1954. In this phenomenon, a pendulum set up in his lab demonstrated a slight change in the precession of its plane of oscillation during the eclipse of June 30, 1954. He repeated his experiment during the eclipse of October 2, 1959, and got similar results. The experiment has been repeated multiple times, with most attempts confirming Allais’ results. One explanation is based in push gravity theory.

How fascinating that in this supposedly enlightened age, solar eclipses continue to weave their own magic and mystery.