Unlocking The Mystery Of BAX, The Death Protein

Unlocking The Mystery Of BAX, The Death Protein 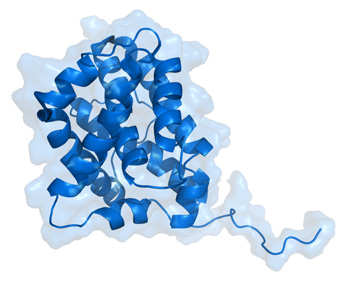 There are many situations in which your body needs to get rid of particular cells. Apoptosis—recognized in 1972—is a form of cell death designed to eliminate cells through activation of a coordinated, internally programmed series of events effected by a dedicated set of gene products.

Apoptosis might occur during development; as a mechanism to maintain cell populations in tissues; as a defense mechanism (within immune response); to remove cells damaged by disease or toxic agents; and in aging. A group of more than 20 proteins, known as the BCL-2 family, interact in various ways to either promote the death or survival of cells.

As you might imagine, cancer cells have too many of the BCL-2 proteins that would promote survival, rather than dying on command.

BAX is a widely studied protein with pro-apoptotic action. (i.e. It kills cells.) When this killer protein is activated, it heads directly to the cell’s power plant or mitochondrion, whereupon it breaks down the mitochondrial membrane, thus destroying the cell. This much has been known for awhile, even if the mechanism of how BAX gets activated has eluded researchers.

Now, though, a group at Boston’s Dana-Farber Cancer Institute has identified BAX’s trigger point. The results were reported in an October 23rd Nature article entitled “BAX activation is initiated at a novel interaction site.” Implications for a drug that could treat cancer by targeting malignant cells using BAX are quite exciting. Listen to Loren Walensky, MD, PhD, lead author of the study: “We identified a switch that turns BAX on, and we believe this discovery can be used to develop drugs that turn on or turn off cell death in human disease by targeting BAX.”

It had been hypothesized earlier that activation of BAX occurred as a fleeting “hit-and-run” event by certain peptides (portions of proteins) called BH3. But, as Walensky notes, “When you tried to measure binding of the BH3 subunits to BAX, you couldn’t detect the interaction.” One reason is that the BH3 peptides used in the laboratory did not retain their natural coiled shape.

To solve the problem, Walensky and company came up with so-called “stapled” BH3 peptides, which—by use of a special chemical crosslink—will retain their natural shape, and thus bind to BAX.

The group then figured out a way to slow down the interaction of BH3 and BAX to make it easier to observe. The idea was to adjust the peptide’s potency so that, as Walensky says, “it was good enough to bind BAX, yet activate it just a bit more slowly so that we could actually study the interaction.”

Using nuclear magnetic resonance spectroscopy, the group could watch for any detectable shift in the structure of the BAX molecule, and that would help them locate the docking site for BH3. The technique paid off.

As Walensky explains, “The discrete subset of amino acids (building blocks of proteins) that shifted upon exposure to the stapled BH3 peptide mapped to a completely unanticipated location on BAX. Because BAX lies at the crossroads of the cell’s decision to live or die, drugs that directly activate BAX could kill diseased cells like in cancer and BAX-blocking drugs could potentially prevent unwanted cell death, such as in heart attack, stroke, and neurodegeneration.”

Walensky is also co-founder of Aileron Therapeutics, a biotech company based in Cambridge, Massachusetts, that is currently testing a cancer drug targeting the BAX trigger, and hopes to begin human trials within a year.