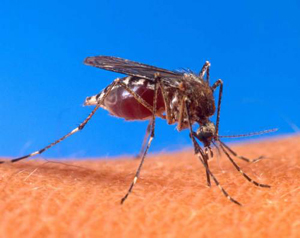 As far as negative impact to humans, no other organism comes close the mosquito. With its roughly 3,500 different species, these blood-sucking parasites transmit such serious diseases as yellow fever, malaria, filariasis, and dengue. Numerous control measures have been in place for decades, including elimination of breeding sites, the application of surface films of oil to clog the breathing tubes of wrigglers (the larvae), and the use of larvicides.

One novel approach—being studied by researchers from Imperial College London—focuses on disturbing the mating plug, an essential structure used by male mosquitoes that keeps the sperm in its proper place in the female. Without this plug, sperm is not stored properly, and fertilization is disrupted.

As it happens, the most important mosquito vector of malaria in Africa is Anopheles gambiae, and this species mates only once in its short life. Clearly, disrupting the mating process could produce compelling results.

The lab determined that an enzyme—transglutaminase—is necessary for the plug to form, and were able to knock out this enzyme in male mosquitoes, under controlled conditions. The challenge now is to repeat this success in the field. Imperial’s Flaminia Catteruccia tells us that if this process could be developed for use in the field, perhaps in a spray form like an insecticide, it could “effectively induce sterility in female mosquitoes in the wild.”

Another approach acknowledges the mosquito as an all-star parasite, and reckons that we can fight fire with fire, so to speak. How about pitting the mosquito against the most successful parasite in existence—one whose sheer number of hosts positively boggles the mind.

I’m referring to a bacterium called Wolbachia, said to infect 60% of the insect species on this planet.

Scott O’Neill, of the University of Queensland (Australia) has been doing some amazing things with Wolbachia and mosquitoes. Earlier this year, his group discovered that Wolbachia cuts the lifetime of mosquito Aedes aeqypti, a vector of avian malaria. This loss of lifespan is significant, since a full two weeks are needed for pathogens consumed in a blood meal to reproduce, and make their way back into the saliva. Thus, only older mosquitoes pose a threat to human health, and the fewer old ones, the better.

Recently, another finding came out of O’Neill’s group, as published in the December 24th issue of Cell. Wolbachia makes Aedes aeqypti more resistant to being infected by the viruses responsible for dengue and Chikungunya, a usually non-fatal disease that can produce symptoms similar to dengue.

Wolbachia is a natural for biological control, owing to its many clever survival mechanisms. It can render sperm ineffective, it can kill males outright even before they develop into adults (via so-called cytoplasmic incompatibility), and sometimes, they can even turn male mosquitoes into females!

As far as its applicability to malaria control, in experiments involving the avian malaria pathogen Plasmodium gallinaceum—closely related to the species that causes human malaria—Wolbachia-infected mosquitoes had 26 times less Plasmodium DNA, and the number of individuals that could potentially transmit the parasite had been reduced by 50%.

All this looks promising, but bear in mind that so far, the work has been done with respect to avian malaria, and its particular vectors and pathogens, rather than the human variety. Still, scientists know that Wolbachia can spread like wildfire through insect populations, and the hope is that this lab success can lead to significant human benefit—even if a resistance to Wolbachia eventually emerges.

“We can predict from evolutionary theory that selection will push the system in the direction of resistance, but we do not know the speed with which this might occur,” O’Neill said. “Even if it was effective for a few decades it might have a major impact on human disease.”