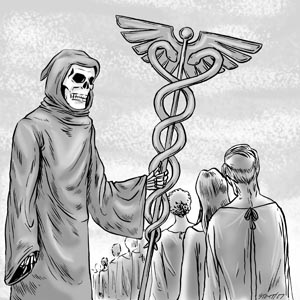 This column has covered the topic of hospital-acquired infections (HAIs)—also known as health care associated infections—before, but the previous articles were sadly bereft of good news. After all, the latest CDC figures indicate that in American hospitals alone, HAIs account for an estimated 1.7 million infections and 99,000 associated deaths each year. As such, HAIs are the second biggest killer of hospitalized Americans—right behind heart disease.

Just last month, the American Hospital Association, the Joint Commission, the Infectious Diseases Society of America, the Society for Healthcare Epidemiology of America, and the Association for Professionals in Infection Control and Epidemiology agreed on a set of guidelines on improving infection control. Still, many contend that the problem was never a lack of guidelines, but rather the lack of adherence to guidelines.

Last year, The Leapfrog Group—an advocacy organization that works on health care quality—found that 87 percent of health care workers did not consistently follow infection control guidelines. On the other hand, when they do follow guidelines, it works. Epidemiologists believe that an intense focus on cleanliness and prevention can lead to significant reductions in infection rates.

Now, Prof. Yehuda Carmeli of Tel Aviv University, an expert in how HAIs spread, particularly on how anti-microbial resistant organisms wreak havoc in hospitals, has come out with a special software program, designed to prevent these killer infections. Carmeli’s team brought this system into their own hospitals two years ago, and the results are quite promising. “We stopped 45 percent of the primary hospital-borne organisms that attack patients from spreading,” says Prof. Carmeli.

The system tracks sensitive patients within the facility, stresses basic infection control procedures, and uses communication methods such as e-mail alerts, SMS (text messaging on cell phones), and other forms of online communications to keep the hospital staff informed of potential HAI threats.

Step one is identifying potentially contagious patients. “What we have done is built a computerized system that collects information from microbial lab cultures and sends real-time alerts and reminders to the wards every day. The system also allows nurses and doctors to send feedback so infections are closely monitored, with special patients being handled very differently from the others,” Carmeli explains.

To be sure, infections can spread rapidly in hospitals since so many of the patients are immunocompromised—either inherently or via exposure. As Carmeli reminds us: When a patient comes to the hospital for treatment, the natural barriers that protect them against infection are bypassed. Intubations, IV lines, catheters and other common hospital procedures expose a patient’s most delicate tissues to the world. If a patient is taking immunosuppressants, steroids, or antibiotics, this can be a dangerous cocktail, and infections are just waiting to attack.”

“A large proportion of these infections are preventable,” he adds. He notes that medical practitioners must be reminded to employ the simple infection control measures they already know.

Apparently, there are those who agree. Prof. Carmeli has been invited to demonstrate his new system to several medical centers in the US, including LA’s Cedars-Sinai, along with the medical schools at Ohio State and Temple University.

While there have been numerous initiatives to improve reporting of HAIs, as well as the promulgation of various guidelines, Carmeli’s system represents one of the first efforts that incorporates high-tech and high-touch—with measurable results.