What A Waste: Septic Tanks And Their Environmental Problems

What A Waste:  Septic Tanks And Their Environmental Problems 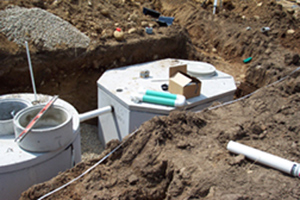 Although many of us probably haven’t given it much thought, one benefit of urban living (in a developed country) is that you are usually connected to some sort of wastewater and sewage treatment system. As environmental concerns grew, these systems were perfected to remove suspended solids, control nitrate and phosphate levels, and disinfect the effluent. In addition, since chlorine is most often used for disinfection, it is also necessary to control the residual chlorine, as it may affect aquatic life. So-called tertiary treatment can remove more than 99 percent of all the impurities from sewage, producing a virtually ready-to-drink effluent.

However, at least 25% of Americans are not so connected, and must rely on septic tanks.

First used by the French in the 1870s, and little changed in design since the 1880s, these devices generally consist of a double-compartment tank, usually made of concrete, fiberglass, or plastic, that is buried in the ground. Input to the tank is directly from the dwelling, and output is to the leach field.

As waste flows into the tank, heavier solids sink to the bottom, forming the “sludge” layer. Lighter substances, such as grease and small food particles, float on the surface in the “scum” layer, while in the middle resides the bulk of the liquid and some additional suspended materials. The second compartment receives the “load” of mostly clarified liquid.

Solids are decomposed by the anaerobic bacterial action of the sludge, derived from our own gastrointestinal systems. Hence the name “septic.” In theory, a relatively harmless effluent will be produced, and given proper soil conditions, further decontamination can occur. Even under ideal conditions, eventually the amount of sludge will interfere with the bacterial digestive action, and it must be pumped out, for disposal elsewhere.

Unfortunately, if the bacterial process is reasonably efficient for taking care of the normal human by-products, it was never well suited to other discards such as simple cooking grease, that can hinder system operation, let alone strong household cleaners, and other chemicals that might kill the working bacteria. These shortcomings can be further complicated by lack of proper maintenance and inflows of wastewater beyond the original specifications.

While a worst case scenario to the individual homeowner might be a severe plumbing backup, by the time this has occurred, untreated sludge has no doubt gone into the environment, since all the leach field calculations are based on a properly functioning system. Thus, our negligent homeowner has become a big-time polluter.

Beware also the mad scientist chemistry set inside the tank. Under the anaerobic conditions, nasty H2S (hydrogen sulfide) can be created. Likewise, nitrates and organic nitrogen compounds are reduced to ammonia, and the greenhouse gases carbon dioxide and methane can proliferate. What’s more, given the load’s inherently low oxidation-reduction potential, phosphate is kept in a soluble form, and that can trigger unnaturally high algae blooms, as well as potentially toxic cyanobacteria.

Further issues derive from critical engineering concerns relating to the water carrying capacity of the surrounding soil, and the height of the water table. Not only does the leach field need a minimum separation from the water table to prevent contamination, but care must be taken to comply with regulations covering septic system clearances from wells, buildings, and various other site features.

Many local governments are aware of the pollution hazards of septic tanks, and have been encouraging—if not forcing—affected homeowners to be far more vigilant than ever before. Some areas have even banned the tanks completely. Ironically, there are certain communities within urban settings that could easily have been connected to existing sewer systems, but either eschewed the “invasiveness” of running all the requisite pipe, or simply retained the status quo to limit growth. Neither tactic makes any ecological sense.

For those with septic tanks, many resources are available, both online and from your local authorities. You can start with this one, from the EPA.

While there will always be some isolated residences that deem a sewer connection economically unfeasible, prudence in health and the environment dictates that any reasonable concentration of dwellings should justify modern sewage and wastewater treatment.