We Still Don’t Care About Doctors 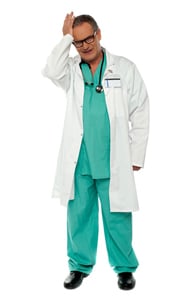 We Still Don’t Care About Doctors

In April, 2010, this column ran a story pointing out a curious paradox. Inasmuch as healthcare—Obamacare—was such a hot topic, no one seemed to care about how poorly physicians were being treated by the system. Indeed, for all of its billions in spending, Obamacare does almost nothing to improve the lot of doctors, even as its rollout underscores the problems they face. Nor does it do much to alleviate their shortage.

It is hardly a revelation that government bureaucrats are the enemies of practicing physicians. Heck, this goes back 50 years to Medicare. But it is only recently that academic medicine, and its supporting cast of fat-cat NGOs, are also openly piling on.

I refer to the iCOMPARE and FIRST clinical trials, which are intended to test whether excessively long work-hour schedules for medical residents at hospitals across the U.S. cause more death and injuries to patients. Your first clue that these trials might be questionable is their hackneyed use of twee acronyms. Here’s the decode: Individualized Comparative Effectiveness of Models Optimizing Patient Safety and Resident Education; Flexibility in Duty Hour Requirements for Surgical Trainees.

Notably, both of these trials allow first-year residents to work shifts lasting 28 consecutive hours or more—nearly twice the current maximum number of hours allowed by the Accreditation Council for Graduate Medical Education (ACGME). And this with the full approval of ACGME. At first blush, this seems surprising, since just four years ago, ACGME published its Duty Hour Standard Enhancing Quality of Care, Supervision and Resident Professional Development. Among other things, based on available research, it limited shifts for first year residents (PGY-1) to 16 hours.

Yet now, ACGME, one of dozens of parasitic NGOs sucking the very lifeblood out of healthcare, provided seed funding and agreed to waive its own requirements so that these trials could proceed. By odd coincidence, the American Hospital Association, whose members would benefit by getting more hours out of existing residents, is part of ACGME.

To encourage hospitals to sign up for the FIRST trial, a presentation prepared by Karl Bilimoria, MD—who would be the principal investigator—assured them that there would be no difference in outcomes. Besides, the residents would be forced to take on more hours. And here you thought that ethical research required voluntary informed consent; or that the highly touted institutional review boards actually mattered.

In theory, IRBs must ensure that risks to subjects will be minimized and would be justified, given the supposed benefits of the work. Except in so-called “low-risk” cases, researchers must obtain and document the voluntary informed consent of all subjects.

However, as pointed out by Public Citizen, the American Medical Student Association, and the Committee of Interns and Residents, informed consent was not obtained. More than that, any IRB finding of low risk is ludicrous in that the 2011 duty hour standards were adopted because risk to patients and physicians had been observed in extended hour situations. Incredibly, Northwestern University, home of dear Dr. Bilimoria, determined that its trial did not constitute research on human subjects. Yes, such mendacious ghouls really are in charge of academic medicine.

Bilimoria and his co-conspirators invoke the specious argument that it might be more risky for doctors to keep “handing-off” patients by virtue of shorter hours, thus destroying continuity of care. This is nonsense, made even more disingenuous when uttered by academic docs and healthcare bureaucrats—the ultimate fanboys of electronic health records. Pray tell, what esoteric patient information could not be documented and handed off to the next doctor?

Michael Carome, MD, Director of Public Citizen’s Health Research Group, has been spearheading efforts to get the federal Office for Human Research Protections (OHRP) to investigate both trials. Carome is asking for sanctions, but OHRP’s record in doing the right thing is far from exemplary.

Carome believes that it is “…highly unlikely that a trial that involves randomizing medical residents to a duty-hour schedule with longer shifts and less time off between shifts could ever be designed and conducted in a manner that would satisfy basic ethical principles or the federal human subjects protection regulations.” He laments that the system has broken down to such an extent that this research would be allowed in the first place.

I would expand his comments: The system has also broken down to the point that the crying need to expand residency programs has been eclipsed by our bloated and vastly corrupt federally-funded academic medical research industry.