What About That Second Wave Of COVID-19? 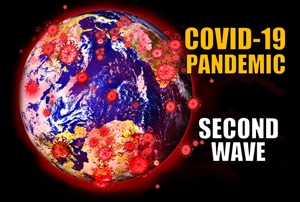 What About That Second Wave Of COVID-19?

As you may have noticed, the modus operandi of our public health agencies—with respect to COVID-19—has often been to scare people, while seemingly ignoring the most vulnerable populations. As you may also have noticed, the injection of politics into the proceedings has been nothing short of appalling. Of course, the overpraised Tony Fauci has virtually made a career out of scaring people—and generally being wrong.

To relieve some of the current hysteria, let’s get back to basics. First, what is “herd immunity”? According to Encyclopedia Britannica…

Herd immunity, also called community immunity, is a state in which a large proportion of a population is able to repel an infectious disease, thereby limiting the extent to which the disease can spread from person to person. Herd immunity can be conferred through natural immunity, previous exposure to the disease, or vaccination.

And, how do we define “immunity”? In the context of this discussion, we are more concerned with so-called specific (or acquired) immunity. It was observed in ancient times that those who recovered from certain diseases would not catch them again. Thus, they had developed an acquired immunity to the particular pathogen. In other cases, one need not suffer the acute disease, as a simple exposure to the pathogen can do the trick. This can be driven by vaccination, as well.

Specific immunity is created by antibodies, and these antibodies prevent infection in two ways. They bind to the pathogen and prevent it from entering the cell; this binding triggers the release of phagocytes, which engulf and destroy the pathogen. Since viruses can only replicate within a cell, keeping them out is especially important.

However, as miraculous as the immune system is, there are limitations. Not all people produce high quality antibodies, so your resistance may vary. Moreover, even though immunologic memory (retaining of previous antibodies) does persist into old age, the vigor of the adaptive immune response to new pathogens (such as COVID-19 virus SARS-CoV-2) diminishes.

For SARS-CoV-2, tests exist for both the antibodies and the active virus. Unfortunately, the current antibody test will also show positive for other coronaviruses, including those which cause the common cold. The CDC has offered guidance on interpreting COVID-19 test results. The active virus test is generally performed.

Although this is a novel virus and authorities are not certain about very much, including how long the antibodies provide immunity, the more people who are positive for antibodies, the better. Bear in mind also that most cases of COVID-19 are mild, and that a significant number of those infected are asymptomatic. Such asymptomatic individuals can still spread the virus, but the extent of this is still being determined.

As to a second wave of COVID-19 infections, what do we really mean? In theory, there would need to be a rise in cases, a peak, a plateau, and then a decline before a resurgence, and we have not yet seen this, according to Dr. Leana Wen, an emergency physician and public health professor at George Washington University, and former health commissioner of Baltimore. She notes that “[W]e’re still in the first wave.” This sentiment is shared by others, including Bernstein Research and Raymond James.

The timing of these “waves” will vary from state-to-state, and are likely affected by differing processes in easing the lockdowns, as well as increased testing. Kaiser Health News discusses a second wave in some detail, including comments from those who wish to invoke the flu pandemic of 1918-1919. As interpreted by some, a second wave of this Spanish Flu occurred once various restrictions were lifted, but beware of making too many comparisons to a society of more than 100 years ago, with much poorer healthcare and mass communication resources.

Some in the media are hyping a recent increase in infections, without mentioning that death rates are flattening or dropping.

By any reckoning, and given the economic devastation wrought by the blanket shutdowns, a more nuanced approach to COVID-19, whatever wave we may be in, is sorely needed. As noted by Joshua Archambault, a senior fellow in healthcare policy at the Foundation for Government Accountability, “Leaders should be looking at running averages for hospital admission rates, mortality rates, and infection rates by different groups to make recommendations.”