Will The Patty Murray Superbug/Tainted Scope Report Shake Things Up? 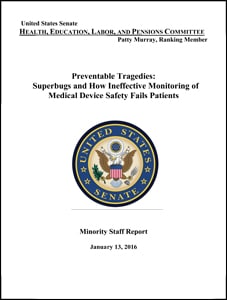 Will The Patty Murray Superbug/Tainted Scope Report Shake Things Up?

Virginia Mason has plenty of awards and recognitions, and eagerly touts them. Thus, it surely did not fit the narrative when it was revealed that at least 39 people were sickened and 18 died between 2012 and 2014 at the facility, due to multidrug-resistant infections, acquired from inadequately “reprocessed” (i.e. high-level disinfected) endoscopes.

Making matters worse, similar outbreaks were discovered in several other hospitals, and serious flaws were to be exposed in endoscope design and regulatory oversight; not to mention incompetence and malfeasance—virtually across the board.

This column has run numerous articles on infection control and on this series of outbreaks in particular. Infection control has always fascinated me, in that it is a relatively low-tech issue in the high-powered arena of big time healthcare. Clearly, the greatest medical tech on Earth will be rendered moot if the patient dies from an associated infection. Yet, infection control still carries about zero prestige in most healthcare facilities.

Let me put this high-tech/low-tech matter in perspective. The greatest scientific achievement of all time—in terms of benefit to mankind—is chlorination of water. Where would we be without safe drinking water? The only thing that might come in as a future close second would be the harnessing of nuclear fusion, and with it unlimited clean energy.

As to Murray’s report, it is a 301-page monster, 258 pages of which comprise three appendices containing dozens of documents. Replete with a catalog of disturbing findings, seven recommendations are also proffered.

A few of the findings…

It would be more than 17 months after two key hospitals traced the infections to duodenoscopes, before device manufacturers and the FDA alerted the healthcare community and the public to the potential risks. At least 68 patients in seven US hospitals were infected with antibiotic-resistant bacteria linked to duodenoscopes during this period.

In certain cases, validation for the FDA 510(k) clearance on these devices was woefully deficient.

Because of inadequacies in “FDA’s outmoded adverse event database, as well as slow and incomplete reporting by manufacturers and hospitals,” valuable time was lost.

On to some of the recommendations (with commentary):

Has merit. This would mimic the post-market surveillance system for drugs. But, what would be the next step? There are far too many questionable drugs left on the market, albeit with Black Box warnings. Is it worth getting congestive heart failure to lower your blood glucose? At least we’ve warned you.

Recommendation #3: FDA should update its guidance to clarify when manufacturers are required to submit a notification to FDA for 510(k) clearance before marketing modified devices.

Good luck with that one. Feckless FDA enforcement actions are at the heart of this entire mess.

Recommendation #5: FDA should have clear authority to deny a 510(k) submission based upon insufficient reprocessing validation data.

They have always had this authority, but sloth and politics can get in the way—and often does.

Indeed, we’ve had medical device regulation since 1976, but all the king’s horses and all the king’s men couldn’t stop this latest series of events. “Recalled” as well as “adulterated and misbranded” devices are still on site. Fear not, though, the bureaucrats have deemed them thus, so you must be safe. Taking actual responsibility for the dead victims? Not so much.