Should You Be Worried About Microwave Ovens?

Should You Be Worried About Microwave Ovens? 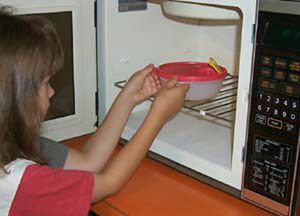 Since the dawn of time, and for a reason no less than to preserve the species, we have always had great concern for the welfare of pregnant women. Indeed, everyone seems to have all kinds of helpful advice for them. Avoid alcohol and tobacco, get plenty of rest, exercise regularly, eat nutritiously, wear flat shoes so you don’t trip, don’t take any sort of drug without dire need—the list goes on and on.

Fortunately, we can make this endless list shorter by one item. I’m referring to an admonition that is as scientifically false as it is needlessly alarming: Expectant mothers must not use microwave ovens, to protect the fetus from dangerous amounts of radiation that can leak out.

Incredibly, this myth is now so widespread that, despite assurances from the Food and Drug Administration (FDA), independent doctors and scientists, and case studies from various corporations, many pregnant women are still afraid to come within walking distance of a microwave oven in use. And on the other side of the equation, some people claim that there is a link between microwave emissions and fertility problems in men. Of course, they neglect to mention that the men affected encountered extremely high exposure on a daily basis, which is markedly different from the relatively minuscule amounts of radiation a conventional microwave oven will release.

In fact, the safety of microwave ovens is one of the few matters in which virtually all diverse interested groups, including private companies, not-for-profit organizations, and government agencies, are in agreement.

Bear in mind the many applications of microwave technology. They can detect speeding cars, send telephone and television communications, and treat muscle soreness. Industry uses microwaves to dry and cure plywood, to cure rubber and resins, to help bread rise, and to cook potato chips.

Microwave cooking can be more energy efficient than conventional cooking because foods cook faster and the energy heats only the food, not the oven compartment. Even better, foods cooked in a microwave oven may keep more of their vitamins and minerals because microwave ovens can cook more quickly and without added water. Most importantly, microwave ovens are safe. A Federal standard limits the radiation that these ovens can leak to 5 milliwatts of microwave radiation per square centimeter at a distance of two inches from the oven surface. This is far below the level known to cause harm.

Ronald P. Jensh, a professor of pathology, anatomy, and cell biology at the Jefferson Medical College, said of microwave ovens that “it is virtually impossible for them to leak radiation.” They are built with many safeguards.

If anything, the type of food you cook in your microwave—pizzas, burritos, chicken nuggets, etc.—is far more likely to harm you than any radiation leak. And, while there have been no studies that have established definitive microwave emissions limits on human fetuses (and animal studies are not analogous), the overwhelming consensus is that negative effects are impossible from the ordinary day-to-day use of a microwave oven. That is, unless the exposure causes excessive heating, the fetus cannot be affected. Besides, if the fetus were excessively heated, the mother would have detected it. The absence of this sensation is generally proof positive that the fetus is safe.

If you’re wondering about the urban legend of the old lady who tries to dry her poodle in the microwave, only to kill it, it is partially true—with one nasty twist. In documented cases of small animals killed in this manner, they did not perish because of ignorance or accident.

Microwave ovens are a wonderful convenience, not a source of danger and unexplored science. Their safety is not an issue of conjecture, but verifiable fact. Pregnant women need not fear these appliances. If anything, they should celebrate the proven usefulness of these affordable and highly effective tools. Now, push “Defrost” on that microwave, and allay your fears!