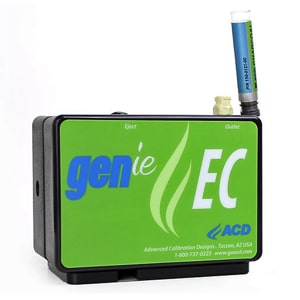 Interscan has been both an avid user and recommender of the calibration gas generation products from Advanced Calibration Designs, also known as ACD. We are now pleased to be a full-line distributor of these excellent calibrators.

ACD calibration gas generators are a more cost-effective, versatile, accurate, and environmentally friendly alternative, providing the ultimate in NIST traceable certified gas standards and bump test gas for many of the most common gas detector calibration and bump testing needs.

The basic idea is that the compound, in its desired concentration and flow rate, is generated galvanically on the fly.  Precise electronics and an integral mass flow controller deliver the calibration standard you need—when you need it.

ACD products generate the gas on demand rather than storing it, providing many advantages over the old approaches. Since there is no gas present until the user requests it, and the gas is never under pressure. ACD products are safe for air transport and do not deteriorate over time. It is not uncommon for customers to use the same calibration source for five, ten, or even 15 years of calibration.

While compressed gas cylinders are often used to calibrate gas analyzers, it is sobering to realize that most of what you are paying for is the air balance gas, and, of course, the cost of the analysis.  To make matters even worse, many users seem to favor the small capacity (34 or 58 liters) cylinders.  And, for those users who employ full size cylinders (around 4000 liters), they face concerns of long-term stability.

ACD generators are available for the following gases:

Bear in mind that gas source cells for any of the compounds can be readily substituted into your calibrator, allowing maximum flexibility and economy.

As you will note, many configurations—all of which carry various certifications—are available. Thus, you are assured of getting the most cost-effective calibrator for your needs.

Here is an Instructional video for the GENie EC, which is descriptive of most of the other units, as well.

Please contact us for further information on the ACD calibration gas generators.