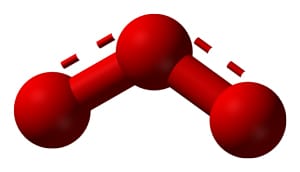 Ozone (aka trioxygen) is a colorless to bluish gas that condenses to a dark blue liquid, or blue-black crystals. Its characteristic odor is said by some to be reminiscent of chlorine, and as such is detectable at concentrations as low as 10 parts-per-billion. However the nose rapidly loses its ability to detect ozone in air.

While the major use of the chemical is in organic synthesis, owing to its strong properties as an oxidant, it is perhaps better known as an odor-removal agent, decontaminator, and disinfectant. Since, unlike chlorine, it does not form residual compounds, it is frequently used for water purification. Moreover, it can be generated on-the-fly—subject to sufficient power availability—and thus (unlike chlorine) does not require hazardous chemicals to be transported to the site.

Repeated exposure to ozone pollution may cause permanent damage to the lungs. Even when ozone is present in low levels, inhaling it can trigger a variety of health problems including chest pains, coughing, nausea, throat irritation, and congestion. Ozone can also aggravate other conditions such as bronchitis, heart disease, emphysema, and asthma, and can reduce lung capacity. People with preexisting respiratory ailments—such as asthma—are especially prone to the effects of ozone.

Full record on ozone from Hazardous Substances Data Bank (HSDB), a database provided by the US National Library of Medicine.

The ozone entry from NIOSH’s Pocket Guide to Chemical Hazards.