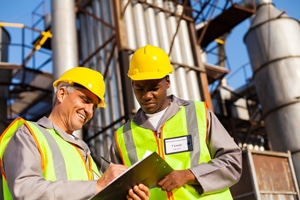 There are three categories of TLVs

OSHA has promulgated PELs (Permissible Exposure Limits) for many substances, and these have the force of law behind them. In general, the PELs are 8-hour time weighted averages, but ceiling limits have been established for some chemicals. 29 CFR 1910.1000 Table Z-1 details these values. In certain cases—such as ethylene oxide—this table refers to a separate section within 29 CFR 1910.

Per 29 CFR 1910.1000(a)(1), the Ceiling Value sets a concentration which shall at no time exceed the exposure limit given for that substance. If instantaneous monitoring is not feasible, then the ceiling shall be assessed as a 15-minute time weighted average exposure which shall not be exceeded at any time during the working day.

The OSHA Action Level—calculated as an eight (8)-hour time-weighted average (and generally lower than the PEL)—is a concentration designated for specific substances listed in 29 CFR part 1910 that initiates certain required activities such as exposure monitoring and medical surveillance. [29 CFR 1910.1450(b)].  Historically, unless otherwise specified, the Action Level is set to one-half of the PEL.

NIOSH issues its RELs (Recommended Exposure Limits), as well. The OSHA standards and NIOSH guidelines are often, but not always, in harmony with the ACGIH TLVs. Similar bodies exist in other countries. It is prudent to consider the recommendations of all relevant agencies, before formulating your occupational health strategy.

All gas detection instruments must be calibrated against a known gas standard, and will have other maintenance requirements. Proper calibration is about 90 percent of successful gas detection. Here is what OSHA says about calibration.

Calibration standards for certain gases may present special difficulties. While many gas standards can be supplied in cylinders, others must be obtained as permeation devices. In fact, several of the most toxic compounds, which need standardization at low concentration, will only be available as permeation devices. And, for some substances, no commercial calibration standard is available.  Even with these, we can help.

Refer also to our Knowledge Base and the article posted here (pdf), originally published in AIHA’s The Synergist.