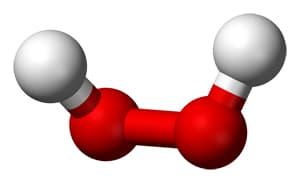 Hydrogen peroxide (H2O2) in its pure form it is a colorless liquid, slightly more viscous than water; however, for safety reasons it is normally used as an aqueous solution. The compound is thermodynamically unstable, decomposing to oxygen and water, especially at higher concentrations and temperatures (it has been used as a rocket fuel). Its principal industrial use is as a bleaching agent, with secondary application as a feedstock for a variety of organic peroxides, including the anti-acne drug benzoyl peroxide.

In healthcare and allied settings, H2O2 is used to sterilize surfaces, and is often deployed as a vapor (VHP) to effect room decontamination.

In the 1980s, a method using hydrogen peroxide gas plasma was developed for sterilization. The H2O2 is added to a chamber, where it is vaporized into a gaseous state; after which an electrical filed is applied, creating a plasma state. In so doing, microbicidal free radicals (hydroxyl and hydroperoxyl) are generated in the plasma.