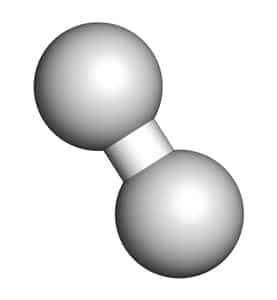 Hydrogen (aka “waterstuff,” dihydrogen) is a colorless, odorless, flammable gas. Once ignited, it burns with a pale blue, almost invisible flame. Although hydrogen is the most abundant element in the Galaxy (ten times as abundant as helium, the next most widely occurring element), it makes up only about 0.14 percent of the Earth’s crust by weight.

Hydrogen finds its principal industrial application in the manufacture of ammonia, and in the hydrogenation of carbon monoxide and organic compounds. Sundry applications occur in petroleum refining, and in the production of oxo chemicals. Additional uses include reducing atmosphere to prevent oxidation; as oxyhdrogen flame for high temperatures; atomic-hydrogen welding; instrument-carrying balloons; making hydrogen chloride and hydrogen bromide; production of high-purity metals; fuel for nuclear rocket engines for hypersonic transport; missile fuel; and cryogenic research.

Recently, there has emerged “hydrogen medicine.” Among other beneficial properties, hydrogen shows effects against oxidative stress, and also various anti-inflammatory and anti-allergic attributes. Mechanistic explanations are incomplete, although it is known that hydrogen regulates certain gene expressions and protein-phosphorylations.

Hydrogen has no known health hazards other than as a simple asphyxiant; at high concentrations it could cause suffocation by displacement of oxygen. To be sure, hydrogen gas is flammable and is an explosion hazard.

Full record on hydrogen from Hazardous Substances Data Bank (HSDB), a database provided by the US National Library of Medicine.

The hydrogen entry from NIOSH’s version of the International Chemical Safety Cards.