A Look At Ketamine 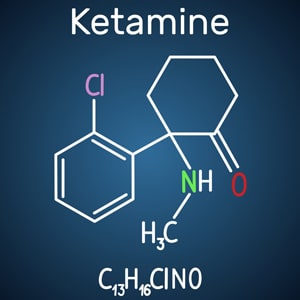 A Look At Ketamine

Ketamine aka 2-(2-chlorophenyl)-2-(methylamino)-cyclohexanone is a general anesthetic, that was originally introduced to replace PCP (phencyclidine). PCP—now known as an illegal hallucinogenic drug of abuse—was used as an anesthetic agent in the 1950s and early 1960s, but was withdrawn in 1965, owing to these dissociative hallucinogenic effects that were often disturbing and sometimes severe and prolonged.

Ketamine was approved by the FDA in February, 1970, and was widely used on the battlefields of the Vietnam War, because of its safety. It is included on WHO’s Model Lists of Essential Medicines. Similar in chemical structure to PCP, ketamine can produce hallucinogenic effects of its own, although not nearly as severe.

Ketamine’s mechanism of action is not completely understood, but includes being an antagonist for the NMDA (N-methyl-d-aspartate) receptors found in nerve cells. The NMDA receptor allows for the transfer of electric signals between neurons in the brain and the spinal column. Ketamine blocks this sensory input. Additional effects on opioid receptors, and on sodium and calcium ion movement across cell membranes have also been reported.

By the late 1970s and through most of the 1990s, ketamine became better known as a “club drug,” than for its legitimate medical properties. As such, in 1999 it was classified as a type III controlled substance. Still, ketamine does find application today as a veterinary anesthetic; for pain control in burn therapy and battlefield injuries; and in children who cannot use other anesthetics due to side effects or allergies. It is in common use for kids in emergency departments. Ketamine has an advantage over opioid anesthetics in that is less likely to depress breathing.

On the abuse side, high doses produce an effect described as the “K hole,” whereby mind and body separate; an out of body experience, if you will. Continued abuse can produce paranoia, depression, and other evidence of cognitive dysfunction.

In recent years, ketamine has been touted as an excellent medicine for use against depression—currently being utilized off-label. One of its biggest proponents is Steven Levine, MD, of Actify Neuropathies, who has treated more than 3,000 patients. Ketamine infusion is indicated in those cases in which traditional meds are not working. And, there are plenty of those cases. As to the specifics, Levine tells us that “Generally, it’s administered in a tapering sequence in which patients receive three infusions the first week, two in the second week, once weekly for the next three weeks, and then moving to maintenance of on average once per month.”

Ketamine has also been effective against anxiety and post-traumatic stress disorder (PTSD). The linked article [previous sentence] lists many literature references, including this one from 2014 on PTSD and a review from 2016 on depression.

While ketamine can itself be a drug of abuse, it has shown great promise in treating cocaine addiction. A 2016 study found that many addicts—after undergoing one infusion—preferred money to cocaine as a reward for participating in the research.

This work from 2017 compared ketamine infusion to a control group that was given midazolam. The primary outcomes were end-of-study abstinence and time to relapse (defined as first use or dropout). 48.2% of individuals in the ketamine group maintained abstinence over the last two weeks of the trial, compared with 10.7% in the midazolam group.

The ketamine group was 53% less likely to relapse compared with the midazolam group, and craving scores were 58.1% lower in the ketamine group throughout the trial (95% CI=18.6, 78.6); both differences were statistically significant. Infusions were well tolerated, and no participants were removed from the study as a result of adverse events.

Cocaine addiction is notoriously difficult to cure, and long-term use of the drug can have severe health effects, especially on the heart. Thus, any promising therapy is surely welcome.

Expect to see more promising applications for ketamine in the future.