A Look At Retroviruses 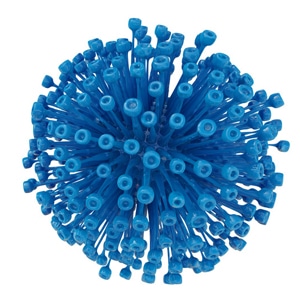 A Look At Retroviruses

Although viruses today are possibly better known as malicious computer code intended to copy itself into other programs or computer files, viruses of the biological type can, of course, be far more dangerous.

According to Stedman’s Medical Dictionary, “Virus” is a term for a group of infectious agents, which, with few exceptions, are capable of passing through fine filters that retain most bacteria, are usually not visible through the light microscope, lack independent metabolism. and are incapable of growth or reproduction apart from living cells. They have a prokaryotic genetic apparatus but differ sharply from bacteria in other respects.

The complete particle usually contains either DNA or RNA, not both, and is most often covered by a protein shell or capsid that protects the nucleic acid. They range in size from 15 to several hundred nanometers.

Said to be Earth’s most abundant biological entity, viruses cause a wide array of diseases, including:

Human Herpesvirus 6 (HHV-6) deserves special mention as it has been implicated in dozens of conditions, ranging from Hodgkin’s Lymphoma to myocarditis.

A retrovirus is a type of RNA virus that replicates in a particularly cunning manner. It uses an enzyme called reverse transcriptase to convert its genetic information into a DNA format, suitable to be integrated into the host’s DNA genome. Thus, the host is now doing the work of replication. Retroviruses are considered “retro” because they reverse the direction of the normal gene copying process.

Usually, cells convert DNA into RNA so that it can be made into proteins. But with retroviruses, the process starts with a “backwards” step. First, the viral RNA is transformed into DNA. Then, the host cell can copy the DNA. Two other retrovirus enzymes are operable in this process. Protease, which allows the retrovirus into the host cell in the first place; and integrase, which inserts the invader’s converted genetic material into the host’s DNA.

Two infamous retroviruses are human immunodeficiency virus (HIV) and human T-cell lymphotropic virus I (HTLV-I), which causes leukemia. As it happens, four other human retroviruses have been identified. HTLV-II, HTLV-III, and HTLV-IV with no known pathology; and HIV-II, causing a more indolent form of AIDS.

And then we have human endogenous retroviruses (HERVs). Consider that 8% of our own DNA originally came from viruses. After all, the process described above has been occurring for a long, long time, and some of that invader DNA became fully and permanently integrated into our own genome. With time have come countless mutations, and in some cases, this helped us form our immune systems.

As noted in a review article entitled “Neural Cell Responses Upon Exposure to Human Endogenous Retroviruses,” HERVs, usually dormant, can be reactivated by environmental factors such as infections with other viruses, leading to the expression of viral proteins and, in some instances, even to viral particle production. According to lead author Prof. Dr. Patrick Küry…

“HERVs have been implicated in the onset and progression of multiple sclerosis, amyotrophic lateral sclerosis, and schizophrenia. Dormant HERVs can be reactivated by environmental factors such as inflammation, mutations, drugs, or infection with other viruses, thus providing a mechanism for their well-established epidemiological link to these disorders.”

The MS connection has the strongest evidence. Multiple sclerosis derives from an autoimmune attack on the myelin sheath that covers nerve fibers. As such, communication problems develop between the brain and the rest of the body.

Küry notes that “Retroviruses were first associated with MS in 1989, but only decades later was it realized that these are in fact HERVs.” The ALS connection is described in this 2008 study, and the schizophrenia link in a 2000 article.

As a 2014 paper entitled “We are all part virus–the role of human endogenous retroviruses” concludes: “HERVs provide us with an important link to our distant ancestors and illustrate how, from our basic understanding of our genome, our biological blueprint is turning out to be even more complicated than anyone could have ever imagined.”