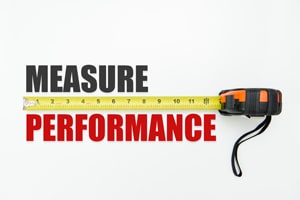 The American Society for Quality (ASQ) defines “benchmarking” as…

A technique in which a company measures its performance against that of best in class companies, determines how those companies achieved their performance levels, and uses the information to improve its own performance. Subjects that can be benchmarked include strategies, operations, and processes.

Going more to the healthcare side, an article appearing in Radiology Management from back in 1994 offers more detail. Four kinds of benchmarking are identified:

While benchmarking has been around since the 1930s, the process was refined by Xerox in the late 1970s, to gain control of its high production costs. Within a few years, the company deployed benchmarking throughout all its business units, and in 1989 received the prestigious Malcolm Baldrige National Quality Award.

Back in 2007, management professor Victor Sower, writing in Quality Progress, described some of what helped Bronson Methodist Hospital (Kalamazoo, MI) become a Baldrige recipient. Invoking both functional and generic benchmarking (as mentioned above) they noticed that hospitals share several processes with hotels. So why not learn from Ritz-Carlton, which earned a Baldrige in 1992? Areas of interest would include employee training, room service, custodial services, customer orientation, and quality metrics. Bronson also looked at practices within Disney—well-known for employee training and customer orientation.

“As the health industry undertakes…change, it is well advised to take into account the experience of other industries in order to understand what worked and what has not. … [I]n the minds of many, the health industry is different. This is certainly true as to its history, technology and culture. However, the decisive factors in what works and what does not are the managerial processes, which are alike for all industries.”

Most will agree that benchmarking is a great idea, but let’s take a look at the mechanics. First, someone has to produce copious amounts of data. Then, the data has to be analyzed, such that your organization is compared to others. Then, reports must be written. Fortunately, in the field of healthcare, our friends at the Centers for Medicare & Medicaid Services compile tons of data, most of which is readily available.

But, it still must be analyzed. Which brings us to OnlyBoth, Inc.—a company steeped in the intricacies of artificial intelligence—that is a provider of benchmarking insights. Last month, OnlyBoth launched what it calls a “new, revolutionary benchmarking engine,” available for evaluation at benchmine.com. The first type of healthcare institution set up for analysis is nursing homes. Source data is from Nursing Home Compare.

OnlyBoth offers one free insight on any nursing home and provides the service starting at $9 for fully evaluating a single nursing home, to make this affordable to everyone. What makes this service different is that insights are provided in plain English straightforward summaries. In fact, the idea is to make the reports appear as if a human wrote them—or even better than a human. That’s why the company’s tagline is “A sentence is worth 1,000 data®.” The name “OnlyBoth” derives from a typical benchmarking result: “Only so-and-so has both as much X and as much Y.”

I recently spoke with CEO Raul Valdes-Perez, who talked me through the website, as he prepared reports on two nursing homes in my area. We were quickly able to determine that…

One particular facility has the fewest total nurse staffing hours per resident per day (2.9) of all the 53 nursing homes within 20 miles. That 2.9 compares to an average of 4.3 across those 53 nursing homes.

Countless other parameters can be compared, and the following core questions are always answered: How is this facility doing? Where could it improve? What has changed? and What’s best in class?

“OnlyBoth delivers unbiased reporting—not opinions or recommendations—in an easily accessible manner so decision-makers can get exactly what they need at their fingertips. You cannot carry out benchmarking at scale without software automation, just as you would not do information research without a search engine. The future of benchmarking is complete software automation based on a complete re-thinking.”